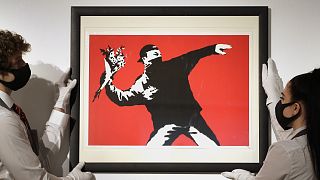 Auctioneers Sotheby's said on Tuesday it would accept Bitcoin and Ethereum as payment for an iconic Banksy artwork set to go under the hammer, a first for a physical art auction and the latest sign of growing mainstream acceptance of cryptocurrencies.

Bidding for the work  "Love is in the Air" is estimated at $3 million (€2.5 million) to $5 million (€4.2 million), Sotheby's said, with the buyer having the option to pay with cryptocurrency.

The auction house has tied up with cryptocurrency exchange Coinbase Global Inc for the sale. In a blog post, Coinbase said it would help manage price fluctuations during the auction in New York next week.

Bitcoin hit a record high just shy of $65,000 (€54,000) last month, the latest landmark on the emerging asset's march to wider acceptance. Its gains have been fueled by growing acceptance among major U.S. companies and financial firms.

Cryptocurrencies have already made a mark in the world of digital art.

A digital artwork - "Everydays: The First 5000 Days" by American artist Mike Winkelmann, who is better known as Beeple - sold for nearly $70 million (€58.3 million) at Christie's in March, in the first-ever sale by a major auction house of a piece of art that does not exist in physical form.

Coinbase said its partnership with Sotheby's could pave the way for further adoption of cryptocurrency across the bidding house's auctions.

What are NFTs and why are they suddenly so popular?