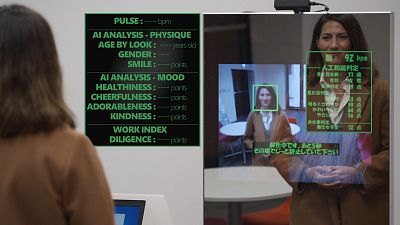 All over the world, smart cities often focus on technology to increase efficiency, but what about social development?

In Japan, there are plans to create a new type of human-centred smart society. They're calling it, Society 5.0. Aizuwakamatsu and Arao are two towns that have adopted the latest technologies to solve existing problems and improve people’s well-being. I went to see what initiatives they're using.

Aizuwakamatsu is a historic Samurai town in the Fukushima Prefecture. It's home to over 118,000 residents and now it has become a testing ground for tech-driven social development.

In the town's innovation hub, a range of partners are developing a 'Smart City Platform'. It's a model they hope to scale up to be used in the rest of Japan and beyond. The platform collects data from connected objects. It uses information such as mobile phone payments and domestic electricity consumption and shares it with administrations, industry and academia.

That information serves as the foundation to create all sorts of smart city services, like cutting utility bills, allowing parents and grandparents to monitor children's school progress, and getting real-time updates on snowplough movement.

Nakamura Shojiro works for Accenture Innovation Center Fukushima, he says that "citizens provide their data to the region through a system called “Opt-in”. For example, as part of a healthcare project, your personal vital data or hospital data concerning you, could be sent to the region". That data is analysed and in return, you're provided with recommendations to help you stay healthy.

‘Opting-in’ means citizens have to consent to provide their data. On the web portal created for the town, locals can share the amount of information they want. The more they share, the more tailored the services become. The more people consent to do this, the greater the impact on the community.

I spoke to one resident of Aizuwakamatsu called Inomata Tomiei. He is 62 years old and he agreed to share information recorded by his smartwatch as part of a healthcare pilot project. He was happy to share this information as he says his medical data could be useful to other people of his generation. The data could be used for scientific research, but he can also use it to make adjustments to his lifestyle.

Takahashi Miki is a communications manager at Arise Analytics Inc. She says that according to their studies, "89% of the people who used this service answered that they had changed their behavior towards their health".

Arao has a population of 52 000. Its pit used to be part of the Miike coal mine, the largest in Japan, and it is a UNESCO World Heritage Site. However, after the pit closed in the late 1990s, the town saw its population rapidly decline. Thousands of residents have left in recent years and the exodus is accelerating. To revitalise, Arao is going digital.

The horse racing track there closed in 2012. But it will soon make way for a smart city offering new opportunities for the town and its residents. Its 35 hectares will be focused on well-being and as such the town hopes to attract a thousand more inhabitants.

One of the town's new projects is an AI-based taxi share application. By calculating the optimal distance between user departures and destinations, the costs can be reduced.

A well-being Mirror is also being piloted. It can identify your pulse and provide AI analysis of your physique, like age, gender, smile and mood. It gives healthiness, cheerfulness and kindness scores. The mirror can then make recommendations tailored for you, like suggesting the practice of more sport or relaxation time. It's a practical application of AI to help people live healthier, happier and longer lives.

Tagawa Hideki is a division chief at the Arao City Office. He says that the goal of the initiatives there are to "reach a society where quality of life is one or two steps higher than it currently is"

With this new social development model, Japan aims to get closer to achieving the United Nations’ goal of more sustainable cities and communities.