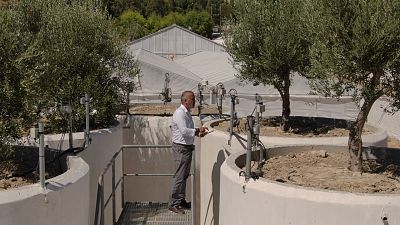 Technology has come so far in the last century; from the chunky and in retrospect clunky early computers and communication equipment, to the sleek devices of today. Then there’s Artificial Intelligence (AI) and the Internet Of Things (IOT) - that is, the interconnectivity of all our devices, fuelled by increasingly powerful systems.

In Crete, olives are big business and an important part of the economy of Greece's largest and most populous island. There are 30 million olive trees on Crete, so the potential effects of smart farming are very far-reaching.

Agriculture, including olive farming, currently consumes 85% of Crete’s freshwater supply. The idea of using smart technology is to substantially cut any waste.

Ioannis Daliakopoulos, a Research Engineer at Crete's Hellenic Mediterranean University, says the use of technology in this project involves constantly monitoring the soil condition:

“On the ground, we have installed a sensor that measures soil moisture, electrical conductivity, how salty the water is and the temperature of the soil - every 15 minutes.

"This information is transmitted to a central base and then to the Cloud, where it’s processed and we can estimate the perfect amount of water that needs to be used for irrigation.”

The farmer can then access the data remotely and control the watering at the touch of a button.

Thrassyvoulos Manios, Vice-Rector at Hellenic Mediterranean University, says the technology will mean the saving of a massive amount of the water resource:

“Farmers, as well as scientists and researchers, should get to know what the internet of things is, exactly, because there are massive amounts that we can do through this new tool.

This all helps the environment and boosts traceability of products too, with consumers set to get more information on how foods are produced.

Giannis Geneiatakis is an olive farm owner whose family have had the same sprawling olive farm in the village of Archanes for three centuries.

He believes the new technology will be extremely helpful:

"In recent years we’ve been facing some difficulties with climate change. Technology always helps us and then problems are solved.

“Technology constantly provides research. It will help us to overcome the problems we are facing now.”

Athens-based company Future Intelligence is providing the technology for the ongoing research in Crete.

Harris Moysiadis, a Business Architect with Future Intelligence, says the benefits of the technology will go far beyond farming and growing:

“A lot of data will come from different devices: from the transportation part, from the retailer, from the agri-food producer.

"And now imagine that artificial intelligence is the umbrella under which all these data processes will be done. So, this will optimise the whole value chain.”

“A lot of data will come from different devices: from the transportation part, from the retailer, from the agri-food producer.

"And now, imagine that Artificial Intelligence is the umbrella under which all these data processes will be done.

"This will optimise the whole value chain.”

Angeliki Dedopoulou, EU Policy Expert for AI at Huawei says connectivity plays a crucial role in joining all of this up:

“Huawei has been in Europe for 20 years. We’re working closely with small and medium enterprises, which are actually the cornerstone of the European economy.

"We offer our 5G connectivity, in order to deploy important technologies like AI, blockchain and IOT in the context of smart agriculture.”

Olive growing may have stood still, relatively speaking, for generations. But now it’s at the heart of innovation – as Europe looks towards a smarter and more sustainable future in food production.