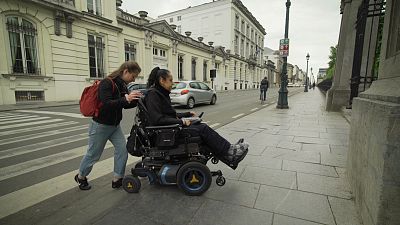 Real Economy visits Warsaw, Brussels and Hannover to see what's being done to improve accessibility across Europe for people living with a disability.

The EU Accessibility Act aims to make it easier for people with disabilities. In addition to improving infrastructure it also seeks to ensure more products and services like smartphones, tablets, ATMs or e-books are accessible.

What is the European Accessibility Act?

Accessibility is seen as key to other fundamental rights such as entry to the workplace, education, public services, leisure. There are currently 120 million Europeans with some form of disability. That high figure is partly due to the rising number of elderly people in the overall population. Until recently EU member states had their own divergent legislation.

The European Accessibility Act - an EU Directive - aims to improve the functioning of Europe's internal market for accessible products and services while removing barriers created by different national rules.

What does the act cover:

Member States have until 2022 to implement the Directive, so it becomes part of their respective national legislation.

The Polish capital Warsaw is Europe's eigth biggest city. Rebuilt after being heavily bombed during WWII, little thought was given to accessibility for people with disabilities. Fortunately, a lot has changed in the last few years.

Konrad Rychlewski, an IT programmer, is visually impaired. While some barriers remain, he says improvements in public transport have made a big difference to his life.

"There’s the metro, the new tram, some new designs around trams stops and metro stops. Safety is the first benefit. Expanding numbers of traffic lights that have a auditory signal, being able to move around independently, freely brings my quality of life so much closer to the quality of life of an average citizen."

"I can meet my friends in different environments."

Katarzyna is as freelance interpreter. For her, accessibility means a fuller and more active lifestyle.

"For me it is really easier to accept some jobs assignments, because some conference events may be more accessible. I can also be more active as an activist, as a trainer, and simply as a person because I can meet my friends in different environments."

Thanks to huge advances in technology, particularly screen readers, Konrad tells us he can work, shop, and manage his financial and administrative affairs on his own.

"Thanks to the online ecosystem, and thanks to our online administrative platform, most if not all of your daily life can be run independently. And that’s really a great progress."

Warsaw has spent a lot of time and money on trying to improve accessibility. A huge amount of effort has gone into adapting public transport and developing public spaces and cultural venues, to make sure they don’t have any barriers.

While challenges remain, in recognition of its efforts this year Warsaw won the Access City Award.

"It’s really thanks to three decades of hard work,'' says Warsaw's Deputy-Mayor Pawel Rabiej. He adds: "Anything new that’s being built in Warsaw has to meet certain standards and is constructed in such a way that no more obstacles are created. We want Warsaw to be a city for everyone. This also applies to people with disabilities. We want them to be able to fully tap into the potential Warsaw has created."

"the infrastructure is not accessible"

In Brussels, we meet Nadia Hadad, an Executive Board member of the European Disability Forum, an organisation dedicated to protecting the rights of people with disabilities.

"The EU Accessibility Act that took place now has done a lot about the digital market, so a lot about digital services, but sadly there is still a lack of requirement when it's about built environment, about public transport, about public spaces, ATM's.

"You don't feel much progress because the infrastructure is not accessible, I cannot get the metro as I want, I need to have two people in the capital of Brussels and put a ramp in front of me so that I have access to the metro and they travel with me until the station and then again they put the ramp to let me out," she says.

In Hannover, Germany we meet Katrin Langensiepen, the first and only woman with any kind of disability to be elected to the European Parliament. She also insists much more work needs to be done to help those living with a disability.

“There are hardly any employment opportunities for people with disabilities. It is often the case that companies like to pay the compensation levy, they’d rather pay a penalty than to train or hire someone with a disability.”

While legislation and legal resolution at EU level do exist often decisions end up being made by national governments.

“I find it very embarrassing for a rich industrial country, a very wealthy country like Germany, which says ‘we have a shortage of skilled workers, we have our challenges here and there without looking. What is the labour market situation like for people with disabilities, women and disabled people?” she adds.

Katarzyna, Konrad, Nadia and Katrin are all fighting for greater accessibility. They all agree, that prejudice, segregation and a lack of visibility are the main obstacles to equality.