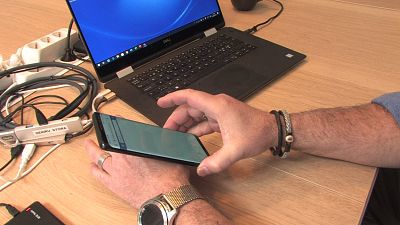 Thousands of Swedes have been pioneering the use of futuristic microchips that are implanted under the skin of the hand.

The technology is used for everyday tasks like accessing your smartphone, opening the front door or setting an alarm.

Those behind the microchips — the size of a rice grain and implanted via a syringe — are working to access other parts of Europe.

Eric Larsen, who leads Biohax Italia, is waiting for approval in Italy from medical centres and the health ministry.

He said he expects to implant a chip into about 2,500 people in the first six to eight months in Milan and Rome.

Even without health ministry certification, Biohax Italia has already been able to embed these chips into a few hundred people with the help of a medical centre.

“It is a step towards the future... It is extremely futuristic although it is already happening. This technology was born to help us, to give us small 'superpowers'," Larsen told Euronews.

But COVID-19 could make people more apprehensive about their business, Larsen said, due to public concern about the contact tracing applications introduced by governments during the pandemic.

“We are seeing that a lot of people in Italy are not happy [with] adding a GPS or something that can track our movement. That might be a danger for us,” he explained.

“We are not tracking movements we don’t have a GPS inside but I think that a lot of people are not aware of that.”

Removing the need for a wallet

Swedish IT solutions planner Martin Lewin uses the two microchips in his hand for things like logging into the computer, setting the office alarm and launching his LinkedIn profile.

But using them as an alternative to cash or card payments is expected to be the tipping point for the technology.

“If you lose your key you won’t get into your house. If someone else gets your key they can basically claim your house in some countries.”

In Sweden, the microchips can be used as a train ticket. But Lewin hopes that he will soon be able to make payments with them.

“That’s what I hope will become a basic function," he told Euronews. "I look forward to an ecosystem where the chip is able to provide all types of access. Where your identity can be carried with you in a simple way."

But the technology hasn't taken off as quickly as he expected.

"It’s taken longer than what I thought and hoped. It was three years ago that I got my chip implanted. It looks like it’ll be another year before the chip will work for making payments."

Larsen said that in Italy, Biohax is talking to Vodafone and Paypal to attempt to make that happen. A company in the United Kingdom, BioTeq, is also working to create contactless payments with implanted microchips.

Steven Northam, the director of UK firm BioTeq, said this is the "tipping point to 'mass' adoption" as the company receives daily inquiries about "payment implants".

**But it seems the technology hasn't moved as fast as some would have expected. Sweden's train operator SJ said they were ending their microchips trial after a "small increase" over the last two years bringing the total number of users to 3,000.

A spokesperson for SJ said that although they're keeping the technology available, they will move in "another direction".**

The microchips use near field communications (NFC) and radio-frequency identification (RFID) to communicate with a system. They are radio waves read at close contact.

It’s "essentially the same" technology that’s in your phone or debit card, explains Dr Rob van Eijk, the managing director for Europe at the Future of Privacy Forum, when you hold it close to a sensor.

It poses the same known data protection issues including the possibility that someone could pick up the signal.

“It’s similar to listening in to a directional microphone, you can pick up the RFID signal as well,” explained Eijk, who used to work for the Dutch Data Protection Authority.

In theory, it could be "used in a way that it makes you stand out a crowd as a means to single out you as an individual in a group...if you’re the only one wearing a biochip and everyone else is not wearing them," he added.

It could also get into more complicated data privacy issues if future versions of these chips track your health or other information, Eijk pointed out.

But many of his customers will get these implants simply to launch their LinkedIn accounts to share their profile more quickly. They're surprised to learn that it's cheaper than they imagined at around €150.

Österlund said they are working with partners so that these microchips contain health information. In the event that someone is brought unconscious to the hospital, a paramedic could scan the chip and get information about allergies or preexisting conditions.

For now, they're working on regulating the chips in terms of the grade of material used and the level of data protection.

"We’re pushing legislation to actually enforce and create a regulatory framework around this because we do work in a legal grey zone right now which is good for development and for disruptive technologies and all but this thing is going into people’s bodies and staying there so we need to take that responsibility," said Österlund.

He says it's already a technology that exists already in at least 20 countries. BioTeq in the United Kingdom has implanted roughly 250 people with microchips.

The implants are not "regulated as medical devices and thus can be implanted by anyone," said Northam at BioTeq, but the company only uses doctors to implant them.

"Personally I don’t see any downside. I know there are people who are worried that they can be traced, but it’s a passive technology, so there’s nothing you can’t have control over yourself," said Lewin.

"It’s necessary to go very close so information can be read off the chip. Some believe that getting the implant will be painful but it’s about equal to a bee sting."

The popularity of these chips will "boil down to what problem is it solving for us," says Eijk at the Future of Privacy Forum. "Look at how quickly we changed from cash money to contactless payments -- that happened in a number of years," he added.

It's a question of whether or not a phone can become so small as to fit under our skin.

"But that’s the next level. That’s not the type of biochip technology that we’re talking about now," said Eijk.

Mistrust between carmarkers and chip suppliers could prolong shortage