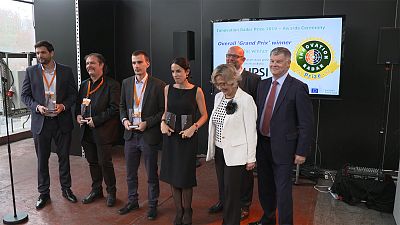 The 4D Hybrid project and the University of Applied Sciences and Arts of Southern Switzerland (SUPSI) are the winners of the Overall Grand Prix of the Innovation Radar Prize 2019, as well as the women-led innovation category prize for 2019.

The 4D Hybrid project is a prototype developed by researchers in robotics, dynamics and mechatronics, mathematical engineers working on kinematics and control as well as software and computer vision engineers.

The autonomous robot has been designed to inspect and repair vertical metal surfaces, including those on sites like offshore platforms or the hulls of ships. Developed to repair all metal surfaces, the robot can work in extreme temperatures - from very hot to extremely cold. And can move backwards and forwards as well as rotate on metal surfaces.

Anna Valente is a professor at ARM Automation, Robotics and Machines Laboratory (Department of Innovative Technologies) at SUPSI. She was behind the prototype and explains its development.

"The robot's main advantage is its ability to function in harsh, complex and risky conditions," she says. "We needed a platform that was able to operate between -20ºC and + 35ºC. This is a wide temperature range. The robot must be able to withstand water, salt, and wind - it must be a tough structure."

As the prototype moves like a tracked vehicle, it is able to climb vertical, extremely slippery surfaces. It has two rubber belts which remain in contact with the surface thanks to a vacuum-based adhesion system.

Diego Gitardi, a mechanical engineer at the Department of Innovative Technologies at SUPSI, says the main challenge in creating the prototype was designing the adhesion system.

The robot is programmed to identify corrosion, then clean and repair the scarred surface.

"The robot is able to perform jointed, complex operations that are currently done manually by human operators," says Anna Valente. "But when operating under these circumstances, manual workers face serious risks - health as well as safety risks."

The work was showcased at a recent event featuring the latest in European research and innovation.

The 2019 Innovation Radar Prize is supported by the European Commission to help innovators realise their full potential.

"We have excellent scientists in Europe," says Signe Ratso, Deputy Director General of DG RTD at the European Commission. "We make up just 7% of the world population, but Europe accounts for 20% of funding for research and innovation and one third of Excellence publications in the world. Where we are not as good is bringing these scientific results from the lab to the market. And this is something we are addressing now with the European Innovation Funds which we are going to establish with the new research framework programme ´Horizon Europe´."

Researchers say they already have some ideas of how the robot can access potential markets.

"Naval logistics is a key, strategic market for us," says Anna Valente. "The robot can be used in offshore sites - both oil and gas platforms or wind turbines. (The technology) could also be applied to the aerospace field."