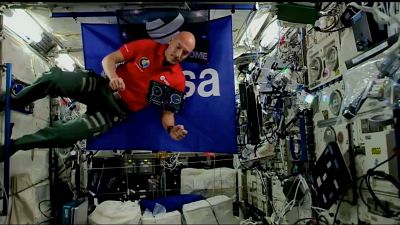 Since the beginning of August, all eyes have been riveted on the forest fires rampaging through Brazil's Amazon rainforest. There are fears over the impact of these fires on the world's climate.

Figures show the Amazon absorbs two billion tons of carbon dioxide every year, that's around five percent of global emissions. This means the fires in the Amazon are using up this carbon-absorbing capacity while at the same time adding carbon to the air through burning.

Euronews space correspondent and ESA astronaut Luca Parmitano was able to observe these forest fires from aboard the International Space Station.

He explains why the fires were started.

"We've been flying over the Amazon forest and over Colombia and Mozambique in Africa, documenting hundreds of forest fires." he says. "These fires are deliberately started to clear space for the planting of crops. Sometimes this is done without realising we are possibly in the process of destroying mankind’s only chance of survival - the lungs of the Earth as the Amazon is known. We are trying to reproduce the type of land used for farming instead of leaving it as a natural resource."

But Luca has also been tracking the progress of Hurricane Dorian as it carved a highly destructive path through the Bahamas.

"After passing over and documenting the hurricane, we were able to observe how it’s formation was taking place," he explains. "And how it was developing and maturing. Even after the hurricane made landfall, we were able document the trail of devastation left behind."

This is the second time that Luca Parmitano visits the ISS, but it is the first time for some of his crewmates. On his first mission, Luca spent 166 days in orbit and took part in two spacewalks.