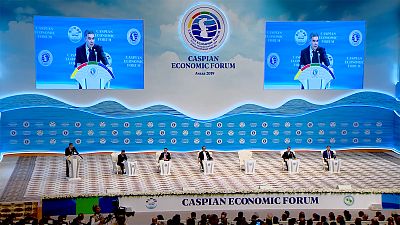 Since the early 2000s, the five Caspian states of Russia, Kazakhstan, Turkmenistan, Iran and Azerbaijan have been holding high-level meetings in an attempt to solve long-standing problems.

Now, they've decided to take the next step and open a new chapter in Caspian relations.

After a landmark agreement that resolved decades of maritime dispute, the five states surrounding the Caspian Sea are now determined to do business together and attract foreign investment.

The Convention on the Legal Status of the Caspian Sea, which was signed by the five heads of states in Aktau, Kazakhstan on August 2018 served as a starting point for further regional integration and opened a new chapter of cooperation in the fields of transport, trade, energy and ecology.

The first Caspian Economic Forum marks the first anniversary of that signing.

It is also a call to foreign investors.

"The main message is that the five littoral states join forces and exploit business opportunities offered by the Caspian Sea," says Azatdurdy Berjanow from the Ministry of Finance and Economy of Turkmenistan.

"We want to take advantage of natural resources. We are also seeking new investments. Our country’s economy is in a positive orbit and we are working to improve our technical infrastructure"

Alongside an exhibition of innovative technologies, it has hosted a car show and a fair of traditional products.

The Prime Ministers of Uzbekistan, Abdulla Aripov and Bulgaria Prime Minister, Boïko Borissov were invited to the forum along with many other guests and had the opportunity to get to know the tradition and culture of Turkmenistan.

Kazakhstan believes that the region can play a leading role in the global economy.

"The Caspian Region is the key region for exports from China and from the south-east Asia market to the European market, apart from the sea roads," says Nuraly Bukeyhanov, the vice-chairman of the Chamber of International Commerce of Kazakhstan.

"Considering that there are some sanctions between the European Union and Russia, this alternative route has big potential. Therefore, big potential means big trade turnover which means good business."

The first part of the Caspian Economic Forum took place at the port of Turkmenbashy.

The International Seaport, which opened in May 2018, significantly boosted Turkmenistan's bid to enhance its economic ties with the Caspian countries and Europe.

To date, the port has served more than 40,000 passengers and transported around 6 million in imports, exports and transit cargos.

"The port is located on the corridor of the great silk road. We have connections with other countries, that don’t have rivers or oceans. In the future, we expect the creation of the new corridor that will connect China, Kirghizistan, Turkmenistan, Azerbaijan and Georgia and will help cargoes from China to reach Europe." says Enejan Tosunyyazowa, from the International seaport of Turkmenbashy.

The official part of the forum took place at the Awaza Convention Center.

The President of Turkmenistan, Gurbanguly Berdimuhamedow and the Prime Ministers of the other four countries held talks on the role and place of the region's economies in the global system of world economic relations, the potential for expanding interaction in the areas of the digital economy and special economic zones.

The agenda also included the possibility of implementing joint investment projects and programs, as well as the simplification of the visa regime.

Tourism in the five littoral states of the Caspian Sea

However, many believe that apart from trade, industry and transport, the five Caspian States should focus on the development of tourism:

"I think that one of the biggest potentials that are under-exploited today is tourism. For the first time I put my feet in the Caspian Sea and it’s just a fantastic place. The area is wonderful, it’s beautiful and you can just build this up, but it has to be built up in a sustainable way." says Umberto de Pretto, the Secretary-General of International Road Transport Union.

"If we can coordinate the transactions between the ports, between the tracking industry, between the railways and just get trade moving, the potential is huge."

Awaza is a popular tourist destination for locals and foreigners, but the sea of Turkmenbashy is also home to dozens of water birds.

The soil extracted during the construction of international seaport was used to make an artificial island, which became the place of habitation, nesting and hibernation of water birds (area of 170 hectares).

The five littoral states declare that they want to attract more tourists while protecting the precious ecosystem of the Caspian Sea.

The 2nd Caspian Economic Forum will take place in Astrakhan, Russia, in 2020.

Kazakhstan off-road adventures: Unique landscapes from the Caspian Sea to the Silk Road

Caspian nations agree on division of oil and gas spoils