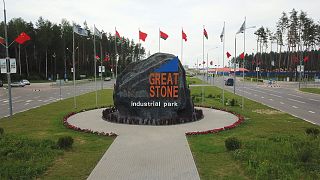 How do you find new incentives for economic development and attract foreign companies? Belarus is currently grappling with this problem in an effort to get new investments and access to the European market. To achieve this goal, a new industrial park is being built near Minsk.

The Great Stone Industrial Park is a joint project with China. Surprisingly Belarus, a small country in Eastern Europe, is one of the key areas of China’s Belt and Road initiative - the so-called Silk Road of the 21st century.

China is counting on Belarus to become a major transit hub delivering Chinese goods to Europe. And Belarus wants to be a part of this process. It sees it as an opportunity to give a significant boost to the local economy.

He told Euronews: "We all understand that the Belarusian economy needs to develop. We need new technologies, new skills that come with foreign investors. In the long run, the Great Stone Park will be able to contribute about 3-5 per cent of Belarus' GDP. And I think these are quite good figures."

More than 60 companies have already been registered, and not just from China and Belarus. They also come from Germany, Switzerland and Austria. The main goal of attracting European companies in Belarus seems to be attainable, even though it is still early days. And it’s a win-win situation for the Chinese investors, who are very keen to gain a foothold in Eastern Europe.

Great Stone's chief executive, Hu Zheng, said: "We see that China and Europe have closer and closer relations today. Many resident companies of this park are focused on Europe. And the Great Stone Industrial Park will allow them to enter the European market on more comfortable terms."

So far more than 400 million Euros have been invested in the development of the Great Stone Industrial Park. In the next few years, this amount is expected to triple.