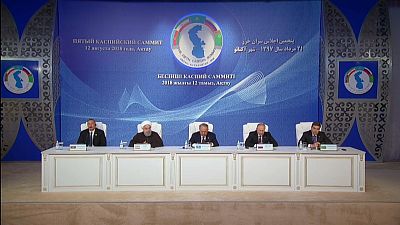 Leaders of the five states encircling the Caspian sea - Kazakhstan, Russia, Iran, Azerbaijan and Turkmenistan - have signed a landmark declaration determining the legal status of the sea during the fifth Caspian Summit in the Kazakh city of Aktau.

After the break up of the Soviet Union, there were disputes over how the shoreline should be divided between the four newly-emerged states and Iran.

It took more than 20 years and more than 50 meetings of working groups in order to prepare the Convention on the Legal Status of the Caspian Sea. Now, its five bordering states join forces and open a new chapter of cooperation in the fields of transport, trade, energy and ecology.

It was the turn of the President of the Republic of Kazakhstan Noursoultan Nazarbaïev to host the fifth edition of the summit, with previous events occurring in 2002 in Ashgabat, in 2007 in Tehran, in 2010 in Baku and in Astrakhan in 2014.

The five heads of states who signed the convention agreed to 15 miles of sovereign territorial waters, in addition to a further 10 nautical miles of fishing area, beyond which there will be common waters.

''The countries which have signed the convention, agree to implement and follow main points of our agreement," the President of the Republic of Kazakhstan Nursultan Nazarbayev announced. "The Caspian Sea is a place of good-neighbourliness and friendship. All bordering states will use the sea in a peaceful way and all countries respect the independent sovereignty of all the other countries. In the Caspian Sea, there will be no military bases of any foreign country.''

For the Iranian president Hassan Rouhani, security was a major priority. "One of the most important elements of this agreement is that no foreign army can enter this area," Rouhani stated, clearly—although not explicitly—referencing the United States. "We clearly declared that no foreign army or navy can operate in the Caspian Sea. By taking this decision, we improve security in the whole region and that is very important for all of us."

In his statement, Russian President Vladimir Putin also chose to focus on security and terrorist threats: "The issue of security, is the most important for the countries of the Caspian Sea. We need to answer to the international threats that we face. We always have to remember, that the Caspian Sea is really close to zones of international conflicts, really close to zones of terrorist activity, like the Middle East and Afghanistan.''

Reaching this agreement has been a difficult process and there are still issues that divide the five states. The particularly thorny issue of how to split up the region's hydrocarbon has been put off for now.

''The issue that created some deadlock in this process, was the delimitation of the seabed," foreign policy expert Zhumarek Sarabekov told Euronews' Apostolos Staikos. "Because each of the Caspian states offered its own approach. [However] the Convention offers a very convenient formula. The delimitation of the seabed should be carried out by neighbouring countries.''

In order to address the issue, the heads of state have instructed their teams to start drafting an agreement whereby the Capsian Sea would be divided into national sectors under UN guidelines. This could then be discussed at the next summit.

Euronews' Apostolos Staikos travelled to the Mangystau region of Kazakhstan for the opening ceremony of the port of Kuryk, also attended by the country's president.

The port is part of a network of international transport corridors. The capacity of the railway-ferry and automobile complex is more than seven million tons of freight per year.

The infrastructure along the customs service zone of the port will be able to process vehicles in less than 30-40 minutes.

''Within the past 5 years, Kazakhstan increased the [transport] capacity of the Caspian ports of Aktau and of the new port of Kurik, from 6 million to 25 million tons per year," explains Kanat Alpysbayev, President of National Company KTZ. "This is a major increase where we see potential growth. It's a place where you can do business, where you can do logistics and basically we provide competitive services.''

Transport and logistics companies from Azerbaijan, Georgia, Turkey, Turkmenistan, Iran, China, Russia and Uzbekistan were all present at the meeting.