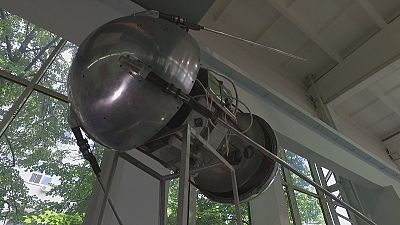 Sixty years ago, Sputnik became the first satellite in space and changed the world forever.

"It was the start of the conquest of space by the Soviets, which nobody was expecting"

Launched by the Soviet Union on 4th October, 1957, this shiny orb kick-started the space race, and opened up the heavens for mankind to explore.

To mark the occasion we arranged access to the private museum of RSC Energia, the Russian state company that actually built the world’s first satellite, officially called Sputnik-1. Hanging in this Moscow treasure trove of pioneering space probes is one of the original Sputnik flight spares, built in 1957. Compact, at just over 80 kilogrammes, its polished surfaces and distinctive antennae are now unmistakable – look at this satellite, and the first word in your mind is ‘Sputnik’.

Our guide is cosmonaut, RSC Energia’s Head of Flight Test Department, and decorated Hero of the Russian Federation, Alexander Kaléry. He recalls how the first satellite was designed to be simple yet effective: “It was suggested after the first successful launches of the R7 rocket to launch the simplest possible Sputnik. Which meant that it was not supposed to have any scientific equipment, it just had batteries, a thermal regulation system, and a transmission module.”

The decision to keep it simple meant the Russian engineers could race to launch first, beating the United States. As soon as Sputnik was launched it began orbiting the world every 98 minutes, broadcasting a unique and easily captured ‘beep, beep, beep’ signal.

It’s a sound that still resonates today. Igor Komarov, General Director of Russian state space corporation Roscosmos, told Euronews: “I believe it was really important, and emotionally important for all the Soviet people, as it was a serious breakthrough, the proof of technological progress, and the proof of the success of those programmes that were underway headed by Sergey Korolev and other scientists. Altogether they managed to create a space industry which is a world leader in many fields.”

Sixty years ago, the news spread at rocket speed.

“It was a major event”, recalls Roger-Maurice Bonnet, Former Director of Science at the European Space Agency. “It was the start of the conquest of space by the Soviets, which nobody was expecting.

“We were expecting it to be the Americans, of course, who did come along later, but it was a major panic in the capitals of the west, knowing that the Russians, the Soviets, were capable of doing such a thing,” he smiles.

John Krige, Historian of Science and Technology, Georgia Tech, says: “Sputnik was incredibly important because it launched the space race with the United States, between the United States and the Soviet Union.

“And people often misunderstand its importance, they think it’s because it was a satellite, but the key threat from Sputnik was, of course, the missile that put it into space,” Krige explained. “It was an intercontinental ballistic missile that the Soviet Union had developed, they tested it just the month before for the very first time, and for the first time in its recent history the United States felt threatened.”

With the space race underway, the lead engineer and manager of the Soviet space effort, Sergei Korolev, moved quickly for another launch. Less than one month after Sputnik-1 they launched Sputnik-2, with the dog Laika on board. She became the first living being in space – although she died from overheating early in her flight.

Veterans of the period recall a time of great ambition.

The cosmonaut Alexei Leonov recounted his memories to Euronews: “Sergei Pavlovich Korolev set the task of creating a manned spacecraft with the Vostok rocket, which was used to launch the first Sputnik. They issued a study on the recruitment of spacecraft crew from the people working as fighter jet test pilots. In 1959, we were already in the first group for testing.”

According to Alexander Kalery, from RSC Energia, the Soviet plans were already advanced in the late 1950’s: “The government issued the programme of the future exploration of space. In this paper they mentioned automatic stations flying to the Moon, flights to Mars and Venus, they mentioned the flight of human beings to space, they spoke about man stepping on Mars, Venus and the Moon, and building their stations there. I draw your attention to the fact that it was in December 1959!”

However, with the American moon landings in 1969, the space race that Sputnik began started to draw to a close.

So what now, on this 60th anniversary of Sputnik? What do Russians today know of its legend?

We asked visitors to Moscow’s Museum of Cosmonautics.

“The first Sputnik was launched in 1957 by the Soviet Union. That’s the only thing I know”, said a teenage boy.

One visitor said: “The whole country put in lots of effort in order to achieve this victory. And this victory was very important for the history of the world.”

“I studied it at school”, recalled a father. “Now I brought my kids here, to show them. Basically we are opening to them those pages of history that they should know. That our country was the first one, and stands at the root of the exploration of space.”

That legacy lives on even today. Every astronaut bound for the ISS blasts off from the same Baikonur cosmodrome as Sputnik. And Russian space agency Roscosmos has many new projects – including the Federation deep space capsule and the new Vostochny launch pad in eastern Russia.

Today it’s all about cooperation with ESA and NASA, rather than competition.

Roscosmos’ Komarov told Euronews: “I believe now it’s not that important in which field we are first. What matters is what we are aiming to do with our partners. I mean those really important breakthrough explorations.

“Among them is ExoMars, the second stage of which we are going to launch in 2020, and now we are in the phase of active preparation. I also mean explorations of the Moon, which will bring us closer to the exploration of the lunar environment and to establishing a station which can be visited and lived in there.”

Such missions to the Moon and Mars would surely have pleased the engineers and scientists behind Sputnik, whose vision, energy and ambition still resonates 60 years later.