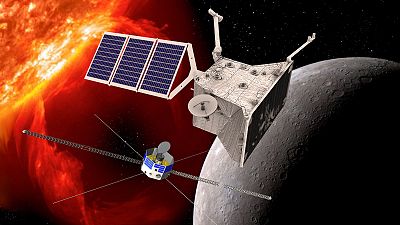 <p>Mercury is the size of the Moon, as hot as a pizza oven, and a mystery to science. We should know more about in the next decade, however, as a joint European and Japanese mission by the name of BepiColombo is preparing to face the furnace and study this strange planet in unprecedented detail. </p> <p>The spacecraft, which has just passed testing at <span class="caps">ESA</span>’s technology base in the Netherlands, actually comprises two probes – the European-built Mercury Planetary Orbiter (<span class="caps">MPO</span>), and the Mercury Magnetospheric Orbiter (<span class="caps">MMO</span>) from Japan’s space agency <span class="caps">JAXA</span>. Together they’ll get close to this 450 degree Centigrade ball of iron and spend a year measuring it from every angle. </p> <p>Mercury is the least studied planet in the inner solar system, for several reasons. Firstly, it’s very small and orbits right in front of the Sun, so you can easily damage your Earth-based telescope by trying to point it at such intense light. Secondly it’s tricky to fly there and not end up being sucked into the Sun by its gravity. . </p> <p>Lastly, it’s really hot. “If you fly to Mercury the environment is really hostile,” <span class="caps">ESA</span>’s Joe Zender told Euronews. “You’re so near to the Sun that during the daytime you have temperatures of 400C and at night time you have temperature of -120C. So it was very difficult to build mechanisms that will work there.”</p> <p>Only two spacecraft have ever been there – firstly <span class="caps">NASA</span>’s Mariner 10 flew past it several times in 1974-75, and then <span class="caps">NASA</span>’s Messenger spacecraft spent four years orbiting the planet before deliberately crash landing onto its surface.</p> <p>Like all successful planetary exploration missions, those two spacecraft raised more questions than they answered. For example, why does the planet appear to be shrinking? Is that really water ice that Messenger spotted in some craters?And why does it host volatiles like sodium, potassium and magnesium in such abundance, contrary to current planetary models?</p> <p><span class="caps">JAXA</span>’s Hajime Hayakawa explained to Euronews that they are also puzzled by Mercury’s magnetic field. “Messenger gave us a big question,” he said “It has showed that the center of the magnetic field is northwards to the center of Mercury, it’s a very big difference and we don’t know why.”</p> <p>To answer those questions the European part of the spacecraft, <span class="caps">MPO</span>, built by Airbus Defence and Space, will orbit down to 480 kilometres above the planet’s surface, a similar altitude to the <span class="caps">ISS</span> above Earth, while the Japanese <span class="caps">MMO</span> will fly out to 11,640 kilometres from the surface. Together they will bring 16 instruments to Mercury – altimeters, spectrometers, magnetometers and more.</p> <iframe width="560" height="315" src="https://www.youtube.com/embed/_xlpvY7-jLE" frameborder="0" allowfullscreen></iframe> <p>First they have to get there, and that’s a journey of over 7 years, meaning the Mercury scientists will have to keep cool until 2025 before their hot science can begin. The spacecraft will slowly use Earth, Venus and Mercury itself to swing into the right position, and then use boosters to brake hard into orbit. </p> <p>Then the BepiColombo pair will face the heat. “We have built specific multi-layer insulation for this mission to cover the entire satellite,” says Thales Alenia Space’s Mauro Patroncini, whose firm developed the thermal control system. “We also have special paint, thermal coating, applied in many of the units such as the antenna. Also there will be the radiator.” The radiator is on the only side of the spacecraft to face the cool darkness of space, and will be used to transmit energy away from the spacecraft. </p> <p>Ironically, BepiColombo’s solar panels won’t actually face towards the Sun, because its radiation is too intense at that distance, and so the specially developed solar array will actually point towards the planet Mercury for energy instead.</p> <p>Overall the aim is to establish exactly how what <span class="caps">ESA</span>’s Director of Science Alvaro Jimenez describes as ‘this weird planet’ fits into the rest of the solar system. There’s a lot about Mercury that doesn’t fit expectations, and this mission should find out why.</p>