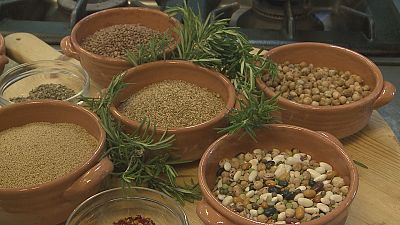 The answer to future global food challenges may well come from the past.

Since the 1960’s, diets in many Western countries have relied heavily on meat. But with global food demand soars set to soar by 70 percent by 2050, other sources of high-quality proteins are needed. The answer could be found in plants such as quinoa and amaranth, which were already known to the Maya and Inca civilisations and are now back in style.

Futuris went to Italy, where researchers at the National Research Centre (CNR) are studying these ancient crops as part of the EU-funded ‘PROTEIN2FOOD’ project.

The project aims to develop high-quality food protein from several kind of seed crops (such as quinoa and amaranth), grain legumes (lupin, faba bean and lentils), using a multi-disciplinary approach involving genetics, agronomy, and food-processing engineering. One of its main goals is to accelerate consumers’ shift from animal-based proteins to plant-based proteins.

We travelled to Italy to visit an experimental farm near Caserta as well as a bio-laboratory in Ercolano, both run by the CNR. We also met a cook in a restaurant to see how to make these grains appealing for consumers.

“Quinoa and amaranth proteins contain all essential amino acids, so even if they have a lower protein level than leguminous plants, they have a higher nutritional quality,” says Cataldo Pulvento, researcher at the CNR-ISAFOM.

In Italy and in the other countries part of the ‘PROTEIN2FOOD’ project – a consortium of 19 partners ranging from breeders to farmers, food producers and product manufacturers from 13 different countries (11 from the EU, plus Peru and Uganda) – researchers are testing various crops to see which ones are best suited to specific soils and weather conditions.

“Quinoa and amaranth tolerate abiotic stress quite well. In the south of Europe the main types of abiotic stresses are water shortage and salinity,” says Pulvento.

The goal of these ‘stress-tests’ is to reach the best crop yield using as little water as possible. One of the key advantages of plant-based proteins is that growing them is much less harmful to the planet than intensive meat production.

“We can eat meat, it tastes good, but it’s very costly considering the land we have to use to produce the plants needed to feed the animals. And then we have a huge consumption of water for every kilogram of meat (produced), which is around ten times higher than for the plants,” says Sven-Erik Jacobsen, professor at the University of Copenhagen and Protein2Food project coordinator.

From farm to fork

At the CNR in Ercolano, not far from Naples, scientists are leading in-depth 3D analyses to study how seeds respond to these stress tests.

“For the farmer it’s important to be sure to cultivate a plant that has a good yield for his business. We also study the seed’s various components, each of which has properties that can be attractive to consumers,” says researcher Giacomo Mele.

As the project covers the entire food supply chain – from farm to fork – it also explores how these seeds and grain legumes can be cooked and appeal to consumers.

“The main problem is that people don’t know much about quinoa, but if we combine it with other legumes, it can be a great ingredient to make high-quality soup, for instance,” says Raffaele Ingico, chef at the restaurant Giòsole in Capua.

Scientists leading the project say that if our consumption shifted from animal-based to plant-based proteins, it would bring down our carbon footprint while improving both biodiversity and human health.

“Our diet will be much more diverse, soil fertility will improve. We can say: it’s only benefits,” says Prof. Jacobsen.