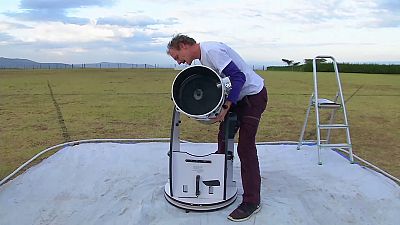 Have telescope, will travel. That’s the mantra of Daniel Chu Owen and Susan Murabana in Kenya. The duo visit some of the most remote areas giving kids an eye on the sky.

Astronomy is not typically taught in schools in Kenya despite the country having amazing skies at night.

Now the couple are hoping to inspire pupils to learn more.

“What we mainly target are schools and all the schools in all honesty, so we want to reach as many kids as possible and the whole idea is to get them to appreciate science not necessarily to get them into astronomy, but get them to appreciate science. So one of our powerful tools is the telescope, it has been around for more than 400 years and yet very few people have looked through one and that includes many kids in Kenya,” explained Susan Murabana, Travelling Telescope.

The travelling telescope, as the company is known brings the moon and stars closer for the children than any book or internet site can. It is a completely different experience and a more powerful one.

“It’s an amazing thing that you can go on the internet and find out the most recent pictures from Pluto, from a mission that is four light hours away, it’s amazing we can do that but doing it with your own eyes and seeing things for yourself I think is really powerful and it stays with you and it’s almost like you can’t deny that,” opined Daniel Chu Owen, Travelling Telescope.

It’s not just about the telescope as students also get the chance to hop inside an inflatable dome where they can learn more about science and astronomy.

“When I went in I saw the planets and I saw Mercury and we were shown the moon and everything and we watched a short film and it made me even want to change my career and I wanted to even do astronomy because it’s so cool, yeah,” enthused one student, Tamara Lugonzo.

Reality headsets help to give a more immersive experience. The hope is the travelling telescope will reach children across Africa, spreading the message of the universe and science.