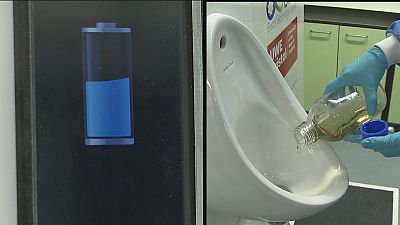 At the Bristol BioEnergy Centre, urine is the fuel of the moment and an outdoor urinal ensures there is no shortage.

Everyone from students to builders and lab technicians at the centre donate their urine to scientific research.

Once collected, it can be deposited into another container for wheeling into the laboratory.

The scientists say gathering the urine when it’s fresh increases its potency as a fuel.

“Here we have some urine, and a urinal, and we’re going to pour this down the urinal. now, that isn’t just waste liquid, that is a fuel for this box of microbial fuel cells. inside these microbial fuel cells are bacteria who will use that urine for their own benefit and they will produce electrons which we will collect as electricity or energy, which is being harvested in this system here to charge a mobile phone. now let’s just see if that’s working. and there we have a mobile phone, hopefully being charged, through the power of bacteria,” he demonstrated.

Researchers have just demonstrated for the first time that urine could be used to charge a smartphone, giving approximately three hours of phone calls with one bathroom break.

After bacteria breaks down the chemicals in the urine, the energy is released as electrons which can be turned into electricity.

Approximately 600 mls of urine is enough for six hours of charge time or three hours of calls on a smart phone.

A microbial fuel cell is a system that drives electrical current by mimicking bacterial interactions found in nature.

“This is a cascade of six microbial fuel cells, where the urine comes into the first one and all the way to the last one. The energy generated from the microbial fuel cells is transmitted to the computer and you can see the individual cells and the amount of voltage that are generated,” explained Tosin Obata, Research Associate, Bristol Bioenergy Centre.

The environmentally-conscious Glastonbury music festival was the ideal place to test the technology.

So in 2015 and 2016 the team from the Bristol BioEnergy Centre built outdoor toilets on the festival site to harness the power of urine.

With the festival attended by approximately 175,000 people over five days, it was a great opportunity to collect a lot of urine.

The experiment also showed the urinals could be set up quickly, far away from the lab.

Once the urinals were erected, the scientists could invite the public to donate their urine and power the toilet lights.

Festival goers queued up to donate their urine to Bristol’s innovative scientists.

The benefits of urine are many. Not only does the microbial fuel cell create electricity, but it cleans the waste in the process.

The scientists put microbial fuel cells in a number of different stress conditions to test it. It can work above ground, below ground, in hot or cold conditions and day or night.

“We have been putting the technology to the test, with things like recharging mobile phones, that’s a very clear example of how that would work, but also integrating the microbial fuel cell in urinals, where we can collect urine, and having the lights of the urinal powered by those microbial fuel cells directly.

“So it’s a stand alone, self-powered urinal which can go in refugee camps, it can go in slums, it can go in informal settlements, anywhere where there’s no infrastructure, there’s no national grid,” said Ioannis Ieropoulos, Director, Bristol Bioenergy Centre.

Each individual microbial fuel cell is very cheap to produce, costing a little under one euro, and is made of inexpensive materials such as ceramics and a carbon catalyst.

Working with the Bill and Melinda Gates Foundation and Oxfam, this year the technology is going to be set up in refugee camps at a handful of locations across Africa.