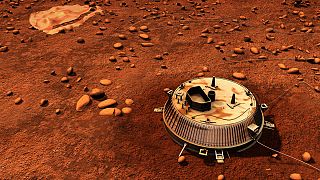 The Huygens probe touched down on Titan in January 2005. Read six reasons why this probe changed our view of the solar system and became a Legend of Space.

1. Huygens pulled off the furthest ever landing from planet Earth

Huygens landed 1.4 billion kilometres from Earth, far further than the Mars or Venus landers ever managed. After a 7-year journey through space and 22 days after being released from its mothership, NASA’s Cassini orbiter, this 1.3 metre wide probe entered the atmosphere of Saturn’s moon Titan 14 January 2005. From there, the descent lasted two and a half hours. It was the first ever successful landing in the outer Solar System.

From the moment it entered Titan’s atmosphere, the ESA probe began to collect and store data. Breathtaking images were taken as it descended past the orange clouds, revealing Titan’s surface in clear images for the first time. Titan is the only moon in the Solar System known to have clouds, so Huygens landing was critical to understand what its surface really looked like. Recently ESA and NASA stitched those images together to make this video of Huygens’ epic descent.

During one of the routine communications checks a fault was found in links between the Huygens probe and its orbiter Cassini. This would jeopardize the mission because, once Huygens reached Titan, Cassini wouldn’t be able to relay the data collected back to Earth. Thankfully the mission team had time to react, and manage to get one channel to work. They only had one working link to Huygens, but it was enough to get data. Phew!

When the orbiter and probe launched, they had a combined mass of 5,600 kilos, packing a serious punch in interplanetary exploration. Combined they had 18 instruments – 6 on Huygens and 12 on Cassini – and have provided us with the most stunning and high resolution images of Saturn and its moons ever seen.

Huygens took 25 years to plan, develop, build and travel from Earth to Titan, and then spent just 90 minutes gathering data during its descent and landing. It worked hard and fast, and the data it relayed back via Cassini was enough to make at least 10 ground-breaking discoveries about Titan, including the observation of dry river beds, lakes, dunes and strong winds, similar to those on Earth. Depending on the season, Titan is also thought to have liquid methane storms. The probe also collected evidence of a subsurface ocean, that is, a layer of water and amonia buried beneath the moon’s icy surface.

You can find details on these discoveries here

5. Huygens was a great example of international collaboration

More than 5,000 scientists and engineers from 17 different countries and three different space agencies participated in the Cassini-Huygens mission. Cassini was constructed by NASA, Huygens was built by the European Space Agency and the communication antenna for this mission came from the Italian Space agency, ASI.

6. Huygens is named after a legend of astronomy

The Huygens probe is names after the Christiaan Huygens, who lived in The Hague from 1629 to 1695. He was a Dutch scientist, mathematician and inventor who was the first person to discover Titan. When he was alive the images of Saturn suggested it was an elongated planet, but he developed a new telescope and managed to distinguish Saturn’s rings for the first time in history.

What is 'Legends of Space'?