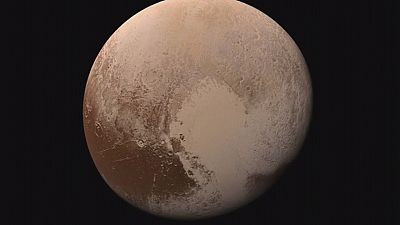 What would it be like to land on Pluto? NASA has just released a video, based on photos taken by the New Horizons spacecraft during its historic encounter with the dwarf planet.

The frames show actual colour simulation of what you would see descending from high altitude to the planet’s surface.

The video is made up of more than 100 high resolution images, taken over six months as the probe approached Pluto in July, 2015.

Because of the huge distance, nearly five billion kilometers, it took about 16 months for mission control to receive the spacecraft data from the Pluto flyby.

New Horizon is currently on its way to a small object located about 1.6 billion kilometers beyond Pluto, in the Kuiper Belt.

Having revealed Pluto’s main moon Charon and the other smaller ones the spacecraft is meant to discover new secrets.

“The target the New Horizons team has settled on is called
2014-MU69, and it was discovered by the Hubble Space Telescope in 2014. The target is a really exciting one because the team suspects that it is made of the same building blocks that have formed all the Kuiper Belt planets and that includes Pluto,” added Amy Shira Teitel.

NASATV update: Amy Shira Teitel explains why we are just doing a 'drive-by' for Pluto http://t.co/jQItWwIQEc

The Kuiper Belt is a circular region, beyond the orbit of Neptune, of icy bodies, including dwarf planets and comets relics from the Solar System’s formation.

Pluto, which officially lost its planetary status in 2006, a few after the launch of New Horizon, is the largest of the Kuiper Belt objects. Its surface show mountainous landscape and icy volcanoes.

The next big ‘encounter’ of the mission the flyby of MU69 is scheduled to occur in January 2019.