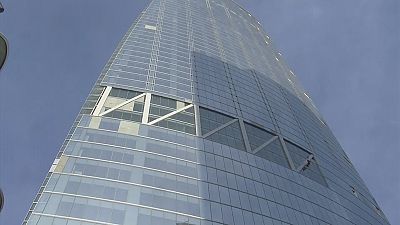 An iconic skyscraper will be one of the tallest in the world when it’s completed in the next few months.

But it’s already making headlines not just for its height but also for it’s state-of-the-art earthquake proofing.

The 73-storey Wilshire Grand Centre in Los Angeles rises 338 metres towards the sky.

The 1.2 billion dollar building is designed to ride out major seismic quakes in the Los Angeles basin.

“Like a reed in the wind it bends in a seismic event but the bending is retarded by BRB’s, buckling restraint braces, which are very large, 35 foot (10.6 meters); long shock absorbers that absorb the energy and delay and that really is like the analogy of a skier going down the hill who relies on his ski poles to bounce off the hill and absorb the energy with his arms,” explained Christopher C Martin, Chairman and CEO, AC Martin Partners Inc.

Construction of the skyscraper faced many challenges.

A steel perimeter frame had to be connected by outrigger restraint braces like the arms and poles of a skier to provide balance.

Eleven earthquake simulations were carried out using historical earthquake data that California had actually experienced in the past.

Wilshire Grand building will put Los Angeles back in the skyscraper business as city aims to rejuvenate its centre. http://t.co/wIaadOAWdx

The centre stands to be the most complicated skyscraper projects ever built in one of the most earthquake-prone areas in the world.

Experts say it will change the skyline of Los Angeles as the city continues to grow at a rapid pace.