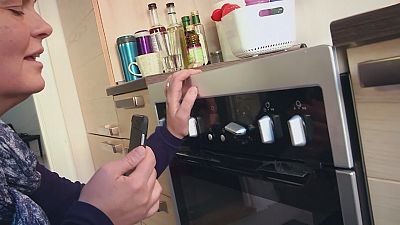 Anne Hansen was not born blind, but around the age of 10-years-old she was told she had problems with her sight.

That problem turned out to be a degenerative eye disease called retinitis pigmentosa. Around 10 years ago, she became completely blind.

But a lack of sight has not stopped the 50-year-old from living a full life, including working from her home in Copenhagen as a self-employed psychotherapist.

Now she has a new high-tech tool, ‘Be My Eyes’, a Danish-developed smartphone app that connects via a live-streaming camera to thousands of so-called ‘helpers’.

Hansen says she often uses it in the kitchen, to correctly set her oven’s temperature or telling certain canned goods apart.

“It is a way to become more independent. When I’m cooking for example, if I’ve invited guests I want it to look right as well. So I just call someone to say; ‘How does this look? Does it look done or does it need to have longer time?’ she says.

This is how it works.

Someone with a visual impairment connects to sighted helpers. They can then help look at the expiration date on milk or navigate new surroundings, for example.

‘Be My Eyes’ is the brainchild of Hans Jørgen Wiberg, who also suffers from retinitis pigmentosa.

The 52-year-old realised smartphones were equipped with all the technology needed to give instant help to blind people or those with visual impairments.

“We hope that we can give a lot of people first-hand experience helping a blind person and in that way kind of bridge the gap, so to speak. And maybe also make it more easy for people. If you meet a blind person on the street, then you can kind of approach them and say; ‘Do you need help with anything?’ or something like that,” he says.

So far developers say they have been overwhelmed by willing helpers. Almost 400,000 people have downloaded the app in the hope of “lending” their sight.

For every blind person, the app now boasts around 12 or 13 volunteers willing to help.

The ‘Be My Eyes’ smartphone app is free to download and currently only available on the iPhone iOS operating system.

Developers say they hope to release an Android version in the near future.