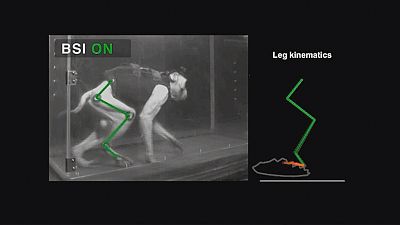 It’s being hailed as a major medical breakthrough: partially-paralysed monkeys have learned to walk again thanks to a brain implant that uses wireless signals to bypass broken nerves in the spinal cord and reanimate the useless limbs.

When the spinal cord is damaged, messages sent from the brain to the muscles no longer run. The aim is to restore the connection. In order to do this, the researchers at the Federal Institute of Technology in Lausanne inserted an implant in the brain area responsible for walking. The implant records and interprets intentions to produce movements. The data is then sent wirelessly and in real time to a pacemaker inserted just below the spinal cord.

“Thanks to this brain-spine interface the animal suffering from a paralysed leg thinks about the leg movement,” explains neuroscientist Grégoire Courtine, who has been running the research for more than a decade. “This stimulates the animal who is able to recover a coordinated gait. There really is a kind of intelligence inside the spinal cord. We are not just talking about reflexes that automatically activate muscles. In the spinal cord there are networks of neurones able to take their own decisions.”

The results, published in the journal Nature, shows the monkeys regain some control of their paralysed leg within six days. The experiments took place in China where research on monkeys is less burdened by regulation than in Europe or in the US.

Scientists say they are not looking for a miracle cure but hope the technology will help people suffering from paralysis.

“It doesn’t mean that suddenly disabled people will be walking again thanks to this brain-spine interface,” says Professor Courtine. “For us, the primary application of this technology is to facilitate motor activity during rehabilitation.”

Clinical trials on humans have started in Lausanne. Scientists estimate the full transition to humans, if successful, would take at least another decade.