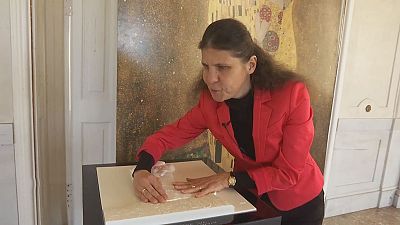 The Kiss by Gustav Klimt is probably the most famous painting in Vienna, with over a million people viewing the masterpiece at the Belvedere Museum each year.

'It probably shines too!' I can't see it, but that's what I think.

The iconic image is now available to blind and visually impaired people thanks to a EU-funded project which has created a 3D relief version.

Dominika Raditsch was one of the first blind people to experience the touchable version of the painting. She lost her vision at age four due to a serious eye infection.

Dominika Raditsch, museum visitor:
“It’s somehow round. It’s entangled. It’s round. You can feel it. You can feel it, it comes with it. And in many places it’s so smooth. And then I think to myself: ‘It probably shines too!’ I can’t see it, but that’s what I think. It pretty much incites the imagination.”

Touching the relief recreates Klimt’s image in Dominika’s mind’s eye. Her fingers operate as a medium between the 3D reproduction and her brain.

Andreas Reichinger has been working on the touchable 3D reliefs project for five years now.

Andreas Reichinger, scientist and 3D relief creator:
“The Kiss so far was my most difficult exhibit. There are very figurative and physical parts. And on the other hand, there are these very flat and ornamental areas.”

The Belvedere Museum, in partnership with the EU-funded AMBAVis project (Access to Museums for Blind and Visually Impaired People), is now planning to provide an interactive audio guide for the blind.

Cameras and sensors will be used to ensure that the part of the relief that’s being touched will be explained.

The museum is home to the world’s largest collection of Klimt oil paintings.