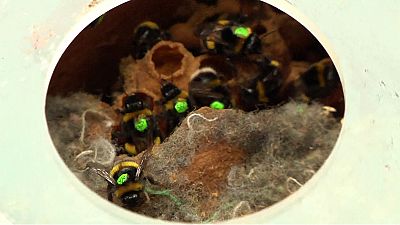 Scientists in London are using a novel technique to save the world’s bees: tagging hundreds of the insects to track their movements around cities.

They’ve been let loose across London to help scientists from Queen Mary University monitor their movements – as well as raise awareness about the dwindling number of bees.

Dilem Canty is one of the researchers involved in this project. She’s searching parks and gardens to record bee numbers.

“First I picked the honey bee in my hand, it’s a baby honey bee, and I get the toothpick and I just put the tag on top of it and then I get the superglue… and I just put a little dab of it onto the bee, just enough to stick the tag onto it,” she said.

Bees are estimated to contribute as much as 650 million UK pounds – or around 778 million euros – to the UK economy.

Much of the decline in bees in the UK has been due to the reduction in wildflower populations, through landscape changes as urban areas expand, and through the use of pesticides.

Study leader Professor Lars Chittka says bees are vital to the farming industry – and to our food. “They contribute up to one third of the food we eat by way of pollination. They pollinate all the crops that in turn generate vegetables and potatoes, and if it wasn’t for bees then we’d have to do the pollinating and that would be a very tedious and expensive job to do.”

Queen Mary University is relying on Londoners – and it hopes citizen scientists further afield – to help them map out which are the more bee friendly areas of England.

Bee spotters are being asked to make a note of the bee’s number and take a photograph to enter a competition and win a prize of 100 pounds.

The university is also encouraging Londoners to plant flowers which are rich in nectar and pollen, such as English lavender, viper’s blugloss, or spiked speedwell.