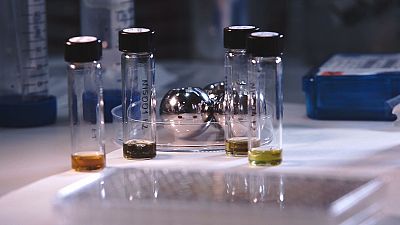 Implantation of a prosthesis involves complex surgery conducted in a sterile environment. Still, sometimes implants get infected with dangerous bacteria. The consequences can be very serious. Why does this happen and what can be done to prevent it?

Ángel, from Barcelona, had his knee joint replaced with a metallic prosthesis. At first, it seemed the routine operation went well – but complications quickly became obvious.

“Three to four days after the surgery, the knee didn’t improve – it got worse: bad inflammation, pus, black spots around the wound. The doctors found it had got infected during the implantation of the prosthesis,” Angel told Euronews.

The infection endangered the whole limb and could have become life-threatening. To stop it from spreading, Ángel had to have intensive antibiotic treatment and several more operations. His knee has never fully recovered.

“The main problem is that bacteria contaminating the surgical wound attach themselves to the metallic implant, and grow into a biofilm – a matrix that wraps them up and protects them from the immune system as well as from the action of antibiotics that we’re administering.” explains Alex Soriano, the Head of Infectious Diseases at Barcelona’s University Hospital Clinic. “And the only solution in many cases is to remove the infected implant which greatly complicates the situation for the patient.”

Infections occur in 1-3% of surgery like this. One possible solution could be to find new antibiotic molecules that combat drug-resistant pathogens, and then coat metallic implants with these molecules. Researchers in this Barcelona laboratory are screening thousands of microscopic algae species, looking for compounds that can destroy biofilms.

“Micro-algae produce large quantities of secondary metabolites with functions that are largely unknown,” explains Sara M. Soto González, a microbiologist and NOMORFILM project coordinator with ISGlobal. “The algae survive in aquatic environments which are full of predators, so they need protection. So we think that these secondary metabolites can have antibacterial properties.”

Finding new antibiotics is just one of many challenges tackled by this European research project. Scientists together with manufacturers of prosthetic devices are developing a set of necessary methods to produce and test infection-resistant implants.

“Once we have these molecules, we’ll test them against most common pathogens, we’ll analyse their safety, and only then we’ll be able to find the best way to apply them on implants using nanotechnology and surface coating,” says Pablo Roza Miguel, Institute Manager with MBA-

We're filming a pig surgery today at the University of Copenhagen for an upcoming #Futuris – follow euronewsknwldge</a> <a href="https://t.co/4W6jIZ9ZT4">pic.twitter.com/4W6jIZ9ZT4</a></p>&mdash; Denis Loctier (loctier) May 25, 2016

The pig’s immune system is similar to that of a human, which allows for safety tests of new implants for future human trials. For this test, researchers in Copenhagen place small metallic implants into a pig’s leg bone and analyse the results several days later.

Henrik Elvang Jensen, Professor of Veterinary Pathology at the University of Copenhagen explains: “Here we can see the drill hole, in which the implant was inserted together with bacteria. And what we are doing is to test different coatings of these implants in order to find out if they can prevent the infection from spreading out into the bone tissue.”