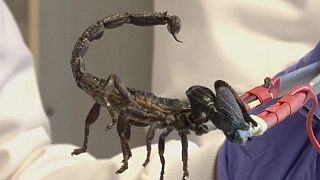 The venom of scorpions and spiders could provide valuable molecules in the battle against antibiotic resistant superbugs, according to scientists.

Scorpions glow in the dark! Though its not known exactly why, these critters glow under UV light. #FactFotoFridaypic.twitter.com/1oOKoHvm4k

It is welcome news as a new global review on microbial resistance warns superbugs could kill 10 million people each year by 2050 – that’s more than cancer kills today.

One drop of a scorpion’s venom can kill a human being, but research chemists here are collecting the poison in the hope of saving our lives.

Venomous creatures like this produce antibiotic type molecules which protect them against bacteria.

This British biotech company Venomtech believes for instance it could lead to a new generation of drugs to protect us against the superbugs.

New antibiotics are desperately needed if medicine is to continue to work.

In a world where bacteria cannot be fought off, a string of the most simple surgical procedures become risky.

Caesarean sections, joint replacements and chemotherapy could become too dangerous for medics to carry out if growing resistance to antimicrobial drugs is not tackled.

Steve Trim is the Managing director of Venomtech :“We have a unique collection of chemists that actually sit in our enclosures and make the venoms for us that the pharmaceuticals companies just don’t have access to. So we’re able to show them you know, here’s some useful chemicals, perhaps some of them you could take on to make a new therapeutic and hopefully to kick start this area.”

Health experts are deeply concerned at the growing resistance to antimicrobial drugs, which include antibiotics, along with antivirals, antimalarial drugs and antifungals.

A British government commissioned report has now been released which aims to provide a way to tackle the global problem.

It suggests drug companies should be rewarded with around 1 billion euros if they develop new antimicrobials, but fined if they do not try.

The report also proposes doctors should be compelled to perform diagnostic tests on patients before prescribing any antibiotic drugs.

The report’s author Lord James O’Neill says we are “facing a growing enemy with a largely depleted armoury”.

Lord James O’Neill, is the chairman of the Government Review on Antimicrobial Resistance: “In the specialist, scientific world there is an enormous amount of knowledge about antimicrobial resistance. The problem was, and less so now, but still, that very few people know about it and in order to get policy makers, who are amongst those who didn’t and still don’t know that much about it outside of health, to do something about it you need to translate it into an economic and financial story.”

Over-use of antibiotics by humans and in animals has contributed to growing resistance, while a new class of antibiotic has not been seen for decades because developing such drugs is commercially “unattractive” to pharmaceutical companies.

If nothing is done, it is projected drug resistance will not just cause 10 million deaths each year by 2050, it will also hit the world’s economies, costing more than 88 trillion euros in lost output, according to some experts.