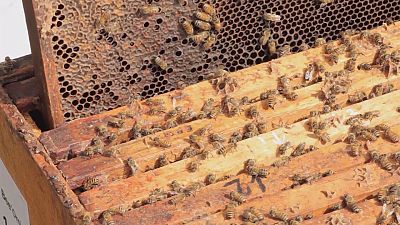 Bee populations around the world have been dramatically declining over the past eight to nine years.

It's absolutely not genetic modification, we're only looking at naturally occurring differences in bees and selectively breeding from those.

Habitat loss, climate change and pesticides are being blamed.

According to scientists in Canada, the rise in bee mortality is having a direct impact on agriculture and food supply since most fruit, nuts and vegetables are pollinated by bees.

“The main reason is that we can manage them very well, we can move them into a field to pollinate whatever crop we want, and many crops essentially wouldn’t produce anything if it wasn’t for honeybees,” he says.

To help combat declining bee populations, researchers at the University of British Columbia are attempting to breed a “genetically superior bee“http://www.unknowncountry.com/news/canadian-researchers-study-and-breed-genetically-superior-bees. The aim of this programme is to propagate genetic traits that will make them stronger at fighting off diseases, pests and pathogens.

“It’s absolutely not genetic modification, we’re only looking at naturally occurring differences in bees and selectively breeding from those. In no way are we introducing foreign DNA into bees to try and make a genetically modified organism. Really, what we’re doing is no different to what humans have done with all their crops and livestock for tens of thousands of years, which is to look for natural variation in the population and selectively breed those that have the best traits or characteristics to make a better bee,” explains Professor Leonard Foster.

Bees have been kept by humans since at least as far back as the Egyptians and have managed to adapt and survive over the centuries.

But in the last century alone, three bumblebee species have been wiped out and four more are in danger of extinction.