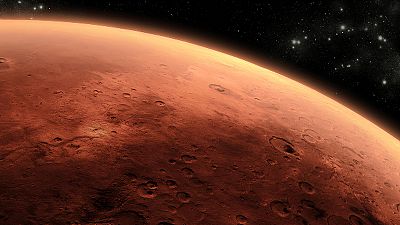 The ExoMars spacecraft has blasted off from the Baikonur Cosmodrome in Kazakhstan to search for signs of life on the red planet.

It’s a mission that presents incredible scientific and engineering challenges – as it looks to unravel some of the mysteries of our solar system.

Launch day was a tense moment for all those involved in the ExoMars project.

Scientists and engineers from Europe and Russia gathered at Baikonur, on the Kazakh steppe to see their efforts head skyward. The precious scientific instruments they have worked on for years were blasted towards space.

The launch-pad chosen is close to the spot where Gagarin first launched to space.

“It (my instrument) will be shaken, it will tormented, and our instrument really does not like that kind of thing. But we hope that it will survive,” he said.

Nicolas Thomas, CaSSIS Experiment Principal Investigator at the University of Bern, added: “For the past 40 minutes I’m starting to get a kind of ‘cribble,’ starting to feel a little edgy.

After a successful launch of the ExoMars spacecraft, the relief was clear.

“Fantastic! We are on the road to Mars! It’s been amazing, really amazing! Exciting!” buzzed Francesca Ferri, AMELIA Experiment Principal Investigator at the University of Padua.

The rocket may have left the stable ground of Earth, but the road ahead is long.

A few hours after the launch, at the Mission Control Centre in Moscow, there were tense faces again as ExoMars prepared for a tricky manoeuvre in space.

The rocket had to fire its engines four times, then separate from the spacecraft.

“It’s a controlled explosion that you’re executing to some extent, and there’s always an element of risk behind it,” explained Nicolas Thomas, CaSSIS Experiment Principal Investigator at the University of Bern.

The separation went to plan, and now ESA has to check that everything is working.

“We run all the spacecraft tests, make sure that we have the spacecraft fully under control. And then in the weeks after we start testing one after another the instruments, all functions of the spacecraft, the big antenna to communciate to Earth,” explained Thomas Passvogel, Head of Science Projects at ESA. “Everything that can be tested will be done within that phase. And then it just drifts away, up until the point that we do the final correction and inject to Mars.”

This is the first of two ExoMars joint ESA-Roscosmos missions, and it is dedicated to studying the atmosphere, sniffing out methane, and sending a small test probe down to the surface of the red planet.

Mars experts across Europe and Russia are watching closely, including at the University of Lyon in France.

One of the big mysteries they want to solve is the presence of methane, which has been found in small quantities on Mars.

“The gas we’re interested in the most is methane. Because methane is not stable in the Martian atmosphere. What’s stable in the atmosphere of Mars is carbon dioxide,” explained Patrick Thollet, Assistant Professor at ENS de Lyon.

“If there is methane in the atmosphere, we know that in a couple of hundred years it will be transformed into carbon dioxide. So if there is any, it means it’s being emitted now, by the planet.”

The scientists will be tracking where methane is emerging on Mars, and comparing it with new images that ExoMars will generate.

“I study the surface of Mars, the main instrument that interests me (on ExoMars) is the camera CaSSIS, which was made in Bern. This camera will allow us to have colour images of Mars, at a resolution which we don’t have today, and above all to have the topography, the hills, systematically, and in high resolution,” said Cathy Quantin-Nataf, Professor at the University of Lyon.

Those images will also feed into the ongoing debate over the presence of salty water at certain times and certain places on Mars.

Thollet commented: “We haven’t really found liquid water on Mars, we have found traces of salts, which were deposited by liquid water. But we’re not talking about cooking salt here, it’s more like a salt like the salt you’d put in water to make bleach. So it’s not something that’s very favourable for life.”

When ExoMars reaches the red planet in October it will split up – the main spacecraft staying in orbit, and its small lander, called Schiaparelli, heading for the Martian surface.

It is a surface that may look like Baikonur, but is very different – far colder and drier.

Exactly how different will be explored by Schiaparelli.

“The opportunity to have a probe going down through the atmosphere allows us to have local measurements of the atmospheric conditions, and this allows us to have profiles that we can put into the models in order to understand how the climate of Mars functions,” explained Francesca Ferri from the University of Padua.

Meanwhile, high up in orbit, the spectrometers on ExoMars, one of them developed by Oleg Korablev, will take fine measurements of the Martian air.

“Our instrument is devoted to the measurement of trace gases by measuring the solar radiation passing through the atmosphere of the red planet,” said Korablev, from the IKI Space Research Institute Moscow.

Patrick Thollet, Assistant Professor at the Ecole Normale Superieure Lyon, told us: “You could think that it’s a dead planet, but in fact things happen, and especially there are changes that involve water, which is the first ingredient of life.”

Cathy Quantin-Nataf, Professor at the University of Lyon, added: “It doesn’t look habitable, but that doesn’t mean that it isn’t inhabited.”

Nicolas Thomas, from the University of Bern, said he is a “sceptic” about potential discoveries on Mars.

“If methane is there in abundance and you see it locally It doesn’t have to be biology, and it’s important to recognise here that I’m a little bit of a sceptic. I don’t go for this ‘life’ business, I try to keep the other guys honest.”

with the contribution of Damon Embling