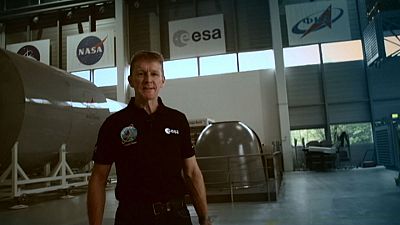 In this month’s edition of Astronaut Academy, we hear from European Space Agency (ESA) astronaut Tim Peake, who is heading off the International Space Station (ISS) today.

“I’m Tim Peake, I’m an astronaut with the European Space Agency and I’ll be launching to the space, to the International Space Station, on 15 December this year.

“One of the hardest things about being an astronaut is learning how to be efficient and flexible. If something goes wrong on board the space station we have a lot of people who have put a lot of thought, time and effort into how we should react to certain scenarios.

“If a piece of debris, for example, were to hit the space station and it would start losing pressure then we need to try to find the leaking module as soon as possible and isolate it so that the whole space station doesn’t go to vacuum.”

“If that fails, then at a certain point – when things start getting dangerous – we’ll actually evacuate the space station, go to our Soyuz spacecraft and undock and return to Earth.”

Born in Chichester, England in 1972, Tim graduated as an army pilot from the Royal Military Academy Sandhurst before becoming a test pilot for the Apache helicopter in the British Army. He is Britain’s first astronaut to visit the ISS and has completed training for spacewalks using both Russian and US systems. He has run the London Marathon, and works as an ambassador for science and space careers in the UK. He launches on a 6-month mission to the ISS in November 2015.
Next Series