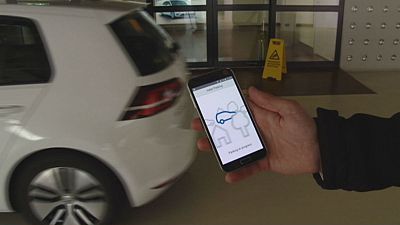 Selfing-driving, intelligent cars, once a staple of science fiction, are now a technological reality, albeit in prototype form. Futuris went to investigate the work of one European research project to find out how automated vehicles work, how they ‘see’, anticipate and respond to the environment around them. What are the advantages and limitations of this futuristic mode of transport?

The cameras are almost invisible, built into the wing mirrors and in the badge at the front.

At a demonstration site at Amsterdam’s Schiphol Airport Futuris watched as a prototype hybrid car was put through its paces. It was started with a swipe and a tap of a smart phone

The automated car can pick up and drop off people at specified destinations, park and wirelessly recharge in special parking lots. All by itself, as Ulrich Schwesinger, technical coordinator with the ETH Zurich/V-Charge project explained:

“The special thing about this car is that we can navigate and locate ourselves exclusively with cameras. The cameras are almost invisible, built into the wing mirrors and in the badge at the front. We can do lots of things, including locating the car in the car park. We recognize obstacles with these cameras,” he said.

Cameras and ultrasonic sensors ensure 360º coverage. Scientists with the European-backed project say the system can distinguish between vehicles and pedestrians.

Christian Häne, a computer vision researcher pointed to a bank of screens showing the intake form the car’s cameras: “Here we see the images relayed by the camera. Here, for example, is the camera directed to the right. From this camera, we can reconstruct the scene in 3D and identify obstacles that we can then use in the car for navigation.”

The car was even designed to understand the different movement patterns it perceives around so it can adapt its reactions in real time.

What we see here is basically the world as seen through the car’s eyes, said Ulrich Schwesinger. “We see on the one hand the data of the stereo camera , which virtually tells the car where it can and can’t go. Then, several times per second, our car evaluates hundreds of different driving maneuvers and chooses the best among these maneuvers”.

For safe, accurate driving in parking lots where GPS signals are unreliable, the car creates its own localization map, mixing data from its cameras and sensors with information from a parking lot server. The vehicle is always aware of its position, said Mathias Bürki, another robotics researcher in the project: “If we want the vehicle to locate itself within its environment, we need to make connections between what the vehicle is seeing and 3D points stored in the map of the car park. These connections are marked as coloured lines. That’s how you can then determine the exact position of the vehicle,” he said.

The vehicle was designed to park and charge up by itself only in parking lots. But researchers dream of a bolder future with automated cars an integral part of everyday transport.

However, Wojciech Derendarz, a researcher on drivers assistance systems acknowledged there were technical and legal challenges to overcome: “Currently, the car is driving at slow speeds. In order to make it more attractive, we have to increase the speed. But for that some technical challenges have to be tackled. One of them is to improve the perception capability of the car. The other one is the car’s reasoning capability, so that the car can make good predictions about what the other traffic participants are doing.”

Other issues that need to be addressed involve making the car as safe and accurate as possible with minimal infrastructure changes and keeping costs low for potential users. But the journey starts now.

Do you know: can a car see?