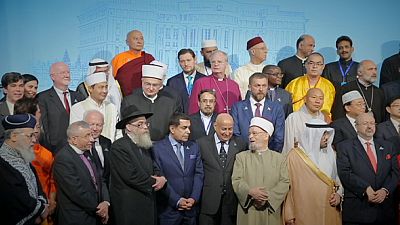 Violence in the name of religion has become an urgent global issue, with growing debate about how to stop it.

The scourge of violence in the name of religion calls for concerted action by governments, religious communities, civil society and the media

A recent congress of world religious leaders in the capital of Kazakhstan is one example of new efforts to find solutions.

The UN Secretary General, Ban Ki-Moon, urged the delegates for their help.

“The scourge of violence in the name of religion calls for concerted action by governments, religious communities, civil society and the media,” he said.

And that is one of the key concerns: that security forces are often alone in the fight against extremism.

Sayed Mohammad Al-Musawi from the World Ahlul Bayt Islamic League told euronews: “We have to deal with it (at) the grassroots, which is the ideology, which has been spread by the misunderstanding of religion.

“It is not only security and the military attacks. No, we have to tackle it through tackling the wrong ideology.”

That means religions publicly disputing extremist messages, and setting an example through their own internal and inter-religious relations.

Monsignor Khaled Akasheh from the Pontifical Council for Inter-religious Dialogue at the Vatican said: “What we say, what we teach, what we write, what we preach, should be against extremism and violence, and at the same time call strongly to building justice.”

Yitzhak Yosef, the Sephardi Chief Rabbi of Israel, told the congress: “Every one should act and not just talk, even more so if we’re talking about religious leaders. It’s our job to be an example to our people.”

Nurlan Asanov, the Imam of the East Kazakhstan Region, told euronews: “When religious leaders don’t have dialogue, they blame each other of impiety, in the absence of faith, or incorrect faith within their own religions. Then there’s personal infighting, which leads people to clashes.”

Others say it is also about youth education and reducing poverty and injustice, but also going after extremist recruiters, including those operating online.

Talib Mohammad Al-Shehhi, an Islamic affairs advisor to the United Arab Emirates government, said: “Everyone who has an idea, who has a conviction, can record what they want and broadcast it to the entire world, and this is the great problem in our society.”

Dr. Kala Acharya from the Somaiya Vidyavihar educational institute in Mumbai in India told euronews: “What the political leaders should do is find the camps where military training to fight against other religions is given to the youth, where they are brainwashed, and to put a ban on such camps.”

The Russian Orthodox Church is one of those calling for a special UN body dedicated to the problem, something it proposed years ago.

Rev. Dimitry Safonov, head of inter-religious contacts at the Russian Orthodox Church, said: “Unfortunately our voice was not heard, the position was not supported. Maybe if there had been backing at the time, extremism would not be as widespread as it is today.”

Amid increasing pressure for solutions, the UN chief told the congress he would announce a new global action plan on the issue later in the year.

Congress of the Leaders of World and Traditional Religions, Kazakhstan