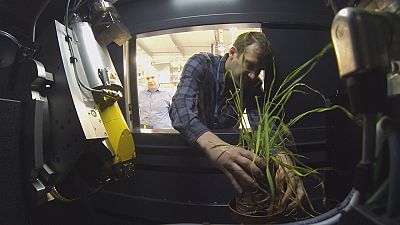 Increasing a plant’s ability to locate and absorb water and nutrients through its roots could potentially lead to bigger and better crop yields. That is the theory underlying an EU-supported research project at the University of Nottingham in England.

Researchers there have been growing wheat and other crop plants in soils with different nutrients and water contents.

“For ten thousand years we bred crops by looking at the above part of the plants,” said Malcolm Bennett, a plant scientist coordinator of the Futureroots project. “We want to make plants more nutrient-use efficient, more water-use efficient. And that requires to actually look at the way roots grow. So we want to uncover the hidden half of the plants.”

The wheat samples are examined in a huge CT scanner. Different scanners at the research facility allow scientists to see how the root architectures of different plant species develop over time. It is a similar technology to the scanners used in hospitals.

“Over the last 5 years we’ve moved from a scan taken in one hour down to be taken in 10 minutes,” said Craig Sturrock, a soil scientist working on the research. “If we can shorten that time even further, it will allow us to look to at even more dynamic processes of roots growth.”

The images obtained with the scanners help to create computer models that accurately reproduce how roots grow in different soils and moisture conditions underground. Computer scientist Tony Pridmore said detailed analysis is a key element of the research: “We are now looking at multiple roots in the same image. We are trying to separate those so we can have a look at the way they interact between each other underground.

“We can also get a sequence of images, and we are using that to look at how the root grows. And we are analysing the image to find where the water is, where the air spaces in the soil are, so that we can study the interactions between the soil structure and the ways the root grows.”

The models have allowed the scientists to confirm theories about how roots are shaped to optimise water and nutrient intake. Sturrock said they had some interesting results: “We’ve discovered that under low moisture conditions, the lateral roots won’t actually develop as well as they do under higher moisture conditions.

“So with these images, we can understand how those roots actually develop from a cellular perspective and tie those data to molecular mechanisms to get a massive insight in how to develop crops that might have a better advantage in soils with low moisture conditions.”

The final aim is to identify the key traits and genes in the root architecture that control water and nutrient intake, so more efficient and adaptable crops can eventually be developed, as Stephanie Smith, a microbiologist at the University of Nottingham explained: “We already know that auxin, a plant hormone, is very much involved in determining how the plant roots. So you may have a very narrow root, or you may have a very wide-branched root, for instance. But we still want to know more. For instance, how nutrients are taken up from the soil. Or how exactly is water taken up into the root”.

Together with developing more productive crops, Malcolm Bennett said their research could have benefits for the agricultural environment: “Currently, a plant will only take 40% of the fertilizer that is placed on it. That means that a lot of fertilizer is going to the soil, it is not taken by the plant. It is polluting the ground water. So what we really want to do is to reduce the amount of nutrients that are lost. And to increase the amount of nutrients that are captured by the plants”.

And for that, researchers conclude, further cooperation between soil scientists, chemists, mathematicians, computer scientists and plant biologists will still be needed.

Do you know: roots or branches, which grow faster?