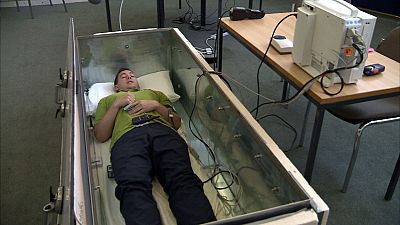 At a training ground for firefighters near Barcelona, scientists and rescue workers from all over Europe are working together on an unusual research project.

They are testing a prototype detector for people trapped under the rubble following an earthquake or after a building has collapsed.

“If we can find people, or at least locate them and offer them some sort of medical support within 24 hours, their survivability, even if the rescue takes a longer period of time, is much, much higher.

“If we locate a victim whom we are sure is dead, we will go and get the body, but maybe not immediately. Instead, we will concentrate our efforts on areas where we are sure to find people still alive.”

“It is a competition between time and life,” adds Raimo Rasijeff.

The system has been designed to smell what rescue dogs can’t.

And to see what rescue workers don’t.

“It’s not always easy, sometimes you may see what looks like a finger sticking out of the rubble, but is it really a finger? Or is it a stone or some debris? So, for instance, we have thermal imaging cameras, which allow us to verify our choices and decisions,” says French firefighter Nicolas Aced.

A mock victim is finally located thanks to the combined information provided by thermal cameras and specially designed chemical sensors.

“This machine has been developed to measure the air beneath the rubble and detect such chemicals which would mean there could be a victim down there.”

The chemical sensors fitted into this surprising prototype were developed thanks to an experiment unlike any other.

At the chemistry department of Loughborough University in the heart of England, researchers have recruited volunteers for a strange kind of test.

Volunteer Liam Heaney is lying inside what looks like a glass coffin.

“They are looking to see whether they can find signs of life underneath collapsed buildings,” he says.

What the researchers are looking for are chemical signals sent out by a trapped body. Matthew Turner is an analytical chemist at Loughborough University.

“We want to detect volatile organic compounds that are in the air all around us,” he says. “When a building comes down, the person’s “signature” is what we are trying to detect through the various phases of building materials at different depths.”

“So the sensors are for blood pressure and heart rate. We don’t want to initially see any sort of stress so that we can get baseline readings.”

“After being some hours in the box, I will start to feel thirst and hunger because we don’t have access to any food or drink,” says Liam. “I think it will be ok to start with, but may get a bit uncomfortable towards the end.”

Today’s experiment runs for six hours, but others run for up to 24 hours.

“You start to feel the air inside the box become a bit more humid, and a bit stuffier. But otherwise, it was fairly ok,” says Liam once it’s all over.

“So what we’re doing using the chemical profile in the breath, in the saliva and on the skin, is trying to find markers of any conditions we are looking at.”

Paul Thomas is Professor of Analytical Sciences at Loughborough University. He explains what happens when a person is deprived of food and water:

“As you burn up all the sugar, starch and carbohydrates in your digested food, you then turn to fat burning. You’ll start to live off the fat in your body. When you do that, the signals in your breath change. And the acetone, for example, will increase.

“So (in a trapped body) we find high acetone levels, CO2 levels, and also high levels of isoprene, a chemical compound generated by cholesterol in your body. And then we also have ammonia, that is associated with urination and sweat, and that comes out through the skin,” says Professor Thomas.

Helen Martin analyses the results on her screen:

“So what this is clearly showing us is that there are chemical profiles in our experiment with rubble and with people in the box. We can clearly see that there is a living person in the void chamber, compared to when there isn’t someone there.”

This is precious information for the specialists who design the instrument that will help detect people under the rubble according to Professor Thomas:

“These measurements enable the sensor specialists to start designing the actual signal processing and alarm algorithms to know the alarm levels (of chemical compounds).”

Back at the training ground in Barcelona, a second mock victim is still missing.

While they continue their search, rescue workers install wireless sensors designed to pick up signs of life even after they have left the area.

Footage and chemical data are matched up with detailed maps and processed in a centralised unit connected to the web.

“The web connection allows an international expert to follow the whole rescue operation live from home. This expert will be able see what is happening on the site. He will have the same information as local rescue workers and will be able to intervene,” says software developer Nuno Ferreira from Portugal.

A sudden explosion causes a fire.

The rescue workers use special cameras that see through the smoke and locate the second victim.

It’s time for the rescuers to give their opinion on the prototype.

“All in all, it works well. There’s a short lapse of time between the moment the machine gets the information and the moment it gets back to us,” says French firefighter Nicolas Aced.

“What I like very much is that this is a wireless system. The rescue technology we are using now always has cables, and sometimes while working you cut these cables, or they get stuck,” says Raimo Rasijeff of the Finnish Crisis Management Centre.

The rescue workers seem generally satisfied with the prototype though there is definitely room for improvement according to some. Sebastià Bassagué from the Catalonia Fire Brigade:

“There are some building materials which, when they collapse, form a very homogeneous kind of rubble, a bit like a sand mountain, without holes and where air and smell don’t circulate. So the actual system needs to evolve to help us in those situations. And the kit should also be a bit lighter.”

“The system will undoubtedly lead to the survivability in these sorts of incidents going right up, which can only be a good thing,” according to Denis O’Driscoll, from Buckinghamshire Fire & Rescue Services.

Fishing for earthquakes: a new wave in seismology