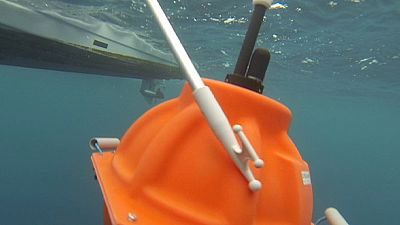 In this edition of Futuris, Euronews teams up with scientists working off the southern French coast in an European Union research project. Researchers are ‘fishing’ for the noises created by earthquakes under the sea.

To land this elusive catch they use high-tech kit that is a lot more sophisticated than nets.

Yann Hello, an electronics engineer with the research body Géoazur, showed us some of the equipment.

“This is a hydrophone that helps us listen to earthquakes,” he said indicating an orange buoy-like device.

“It can record many other noises under the ocean’s waters: the wind that creates waves, sea mammals, icebergs cracking. But we’re interested in the noises created by earthquakes.”

Once in the water these hi-tech seismologists’ ears are programmed to drift away with deep currents.

Romain Verfaillie, a computer scientist with the research organisation Osean, explained: “We send different programming parameters to the device via radio signals. Thanks to an internal clock and a pressure transducer, we can tell it to go to a certain depth, fix the length of the mission, or decide how long we can keep on recording data”.

Each time they record a significant earthquake sound, the hydrophones autonomously rise to the surface and send the data by satellite. At the end of their mission, they can be recovered and re-programmed for a new one.

The devices are a masterpiece of electronic and hydraulic research. The main challenge is to distinguish earthquake sounds in an extremely noisy underwater environment.

“The noise in the ocean is so tremendous. There are ships, there are oil companies prospecting for oil, there are whales that sing their own songs… the storms also make a lot of noise. So there are all kind of noise sources down there.

“We are looking the earthquakes in the noise. So a lot of our work has been to develop the intelligence, the artificial intelligence that allows this computer to find out if there is an earthquake or there is just a whale call, for instance.”

The technology has many potential uses. It could also be used for marine mammal research, or even to locate black boxes after a plane crash at sea. But first and foremost, scientists are working on concrete projects on earthquake research.

Yann Hello outlined the possibilities: “Six hundred of these devices scattered around the world’s oceans in the framework of international cooperation would give us a much more accurate imaging of the Earth’s interior than we have now, especially in the southern hemisphere, where there are more oceans and where we lack data.”