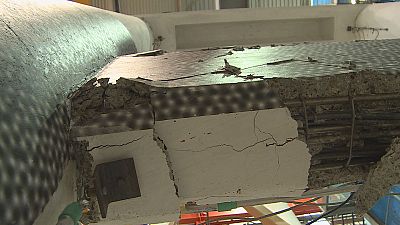 Earthquakes take lives, destroy buildings, wreck roads and infrastructure. Is there a way to protect our cities with computer technology?

Earthquakes cannot be prevented. But with new technologies, a lot can be done to ensure that the urban infrastructure is ready when a disaster strikes.

Can we find out if a bridge is reliable enough to withstand an earthquake, and if it is not – can we know this in advance to prevent severe consequences? Futuris travels to Italy, where researchers are working on an answer to these questions.

Earthquakes are being simulated in the lab at the European Commission’s Joint Research Centre in Ispra.

The strength of two viaduct piers will be tested. It is a typical design of many bridges built 50 years ago, when adequate seismic protection was not a construction requirement.

“Two actuators will actually simulate what happens at the top of the pier during the earthquake motion at ground level. So they will move the pier in two directions, back and forth,” says the European Laboratory for Structural Assesment’s Researcher in Civil Engineering Martin Poljanšek.

Webs of sensors and high-resolution stereo cameras register deformations of the piers during the test. This data will support new methods and tools to evaluate seismic risk for bridges across the EU.

“The project we have here today aims to become a reference, an example, for EU-wide action to reinforce European structures such as bridges and viaducts in order to better resist earthquakes,” says the head of the ELSA, Artur Pinto Vieira

When the simulated earthquake begins the vibration. is invisible, and can only be seen when the video recording is speeded up a few times faster.

“A typical earthquake would last perhaps 10-15-20 seconds; here, in our lab, a test lasts for 3-4, maybe even 5 hours. But this gives us the opportunity to really follow how the damage progresses throughout the whole cycle of an earthquake,” says Poljanšek.

It is clear that one of the piers, isolated from the bridge deck with friction pendulum bearings, suffers much less damage. What happens to the rest of the bridge is digitally modeled in what scientists call “online cyber-physical simulation”.

“We’ve got a computer model of a bridge that includes all its piers, including the two piers that we’re testing physically. The data we’re getting allows us to calibrate the model of these two piers, and then for the rest of the bridge,” says experiment leader Pierre Pegon.

So, would it be justified to retrofit an old bridge with seismic isolation, or is it less expensive to just fix the damage after an earthquake? The virtual model will help choose the best solution in each individual case, taking into account the importance of the bridge for post-eartquake use and the expected time for repair.

“First of all, with this test we have confirmed that bridges built in the 1950-60s are highly vulnerable in an earthquake – not as much from a security point of view but rather economically. And secondly, we confirmed that base isolation is an effective means of protecting the bridge and keeping it usable after an earthquake,” says the JRC’s earthquake expert Fabio Taucer.