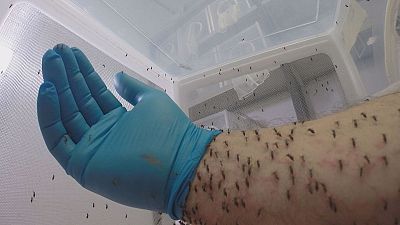 Mankind has been at war with mosquitoes down through the ages because of the threat they pose through malaria.

“I’ve been in the business of mosquitoes for the last 22 years, studying these insects not only because they are fascinating, but also because they cause a lot of trouble in the world through diseases like malaria, which still every year cause the death of more than 700,000 people worldwide,” says Bart Knols, a medical entomologist

He is one of the lead researchers on a European project that is taking the battle to the mosquito with a new simple and inexpensive device.

Knols is the coordinator of the In2Care/MCD project: “These insects – they have been with us for millions of years, they are an evolutionary Rolls Royce if you wish – I mean they are very good in finding people, very good in transmitting the diseases that they carry, and controlling them for us as mankind has been very complicated – because if we spray insecticide on them they become resistant. So we have to find new and very creative ways of killing these mosquitoes and parasites,” he says.

Mosquitoes bite at night, entering buildings through ventilation shafts and other openings. The European research project has developed a simple solution; plastic tubes with nets inside. The nets are coated with insecticide that electrostatically sticks to mosquitoes.

Researchers have tested the device in more than 1,300 houses in Tanzania with good results. They are now working with local construction companies to have the anti-mosquito tubes installed in all new buildings.

“For a full seven months we can kill 100% of the mosquitoes that make contact with the gauze,” says Knols.

“So we know from field data that it actually works for more than half a year. The installation cost can be quite high upfront, but afterwards, if you have to replace only the netting, it will be very cheap. We have calculated that on an annual basis, per person per year the cost would be one to two dollars.”

Scientists are trying different materials and shapes to maximise cost-effectiveness. The tube, installed under the roof, is out of reach of children, so a wide range of insecticides can be used safely. Studies show that enough of the chemical sticks to the insects to ensure that they don’t develop a resistance.

With the aid of a graphic medical entomologist, Janneke Snetselaa explains: “Here, for instance, you see a mosquito that’s been exposed to our coating. All the orange you see here is where it’s got insecticide on its body – so it’s way better exposure than, for instance, a bed net.”

Potentially, the system could be used in conjunction with other methods, as Knols explains: “The future for this technology is very simple: we now have two main methods of malaria mosquitoes control in Africa – one is indoor spraying on the walls with insecticides, which is done twice a year, or we put people under bed nets. What we want to achieve is that this is number three. We have nets, we have indoors spraying, and we have eave tubes.”

Do you know: how do you feed a mosquito?