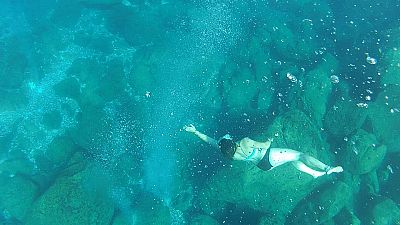 Is it possible to safely dispose of excess CO2 by storing it deep in the seabed? And what would be the effect on the ecosystem if this practise was widely used? A European research project carrying out tests in the North Sea and the Mediterranean is seeking to answer these questions.

In idyllic waters off Italy’s Aeolian Islands researchers are studying the possibilities of Carbon Capture and Storage, or CCS. Their goal is to make a significant contribution to reducing the greenhouse gases causing global warming, according to Klaus Wallman, a marine geoscientist and Eco2 Project coordinator: “The idea is to prevent CO2 from coal-fired power-plants and other facilities reaching the atmosphere because that accelerates climate change.

“We want to prevent that. So we separate it and then we have to store it underground in geological formations. You can do that on or off-shore. But in Europe there are better possibilities in the off-shore areas, below the sea-floor, than onshore.”

The scientists working off the Aeolian Islands are trying to figure out what happens when carbon dioxide leaks into the sea from the seabed. The archipelago was formed by volcanoes and there are big quantities of natural deposits of CO2, making it an ideal research site.

“Around here there are organisms that have been adapted to this environment for a long time. This is an area where the CO2 escapes naturally, an area where, therefore, the Ph is usually lower than in other areas,” says Cinzia De Vittor, marine biologist on the project.

Chasing bubbles is a key part of the research. To analyze the dynamics of the gas, the scientists need to observe the behaviour of the endless stream of bubbles rising from the seabed. In addition to becoming accomplished divers they have had to develop highly specialised equipment.

“We’ve developed a bubblebox to measure the size of the bubbles. We illuminate the bubble from the background. That makes it easier to measure it in the computer later. That’s important for our numeric models,” says Lisa Vielstädte, another marine biologist working on the initiative for the GEOMAR Helmholtz Centre for Ocean Research.

“We need this information to test the data about the speed at which the bubbles rise and their size, in relation to our models.”

Another way of visualising the CO2 is through observation of Ph levels in the marine environment. Studying the movement of the outflow allows the researchers to develop a model that can monitor the venting gas and predict its dispersal.

“The dissolved CO2 causes changing Ph. This is what we are looking at, to see how that moves through the seasons, to see the best places that this could be detected,” says Marius Dewar, a mechanical engineer from Heriott-Watt University, which is also contributing to the project.

The work is not restricted to relatively shallow offshore waters. Further testing is being done on CO2 storage at deepwater sites.

For some years, carbon dioxide has been stored deep in the seabed of the North Sea in reservoirs from which oil has been extracted.

The new technology assesses the risk of leaks and what the possible consequences would be if they occurred, as Peter Linke, a GEOMAR biologist explains: “We let a limited amount of CO2 escape from the machine. We then surveyed that with our sensors and tried to follow the footprint in the water. It’s extremely important to incorporate this data into our models in order to make forecasts.”

The physical conditions of the North Sea are recreated at a GEOMAR laboratory in Kiel in Germany. The goal is to define a digital model that works for leaks on a small and large scale.

“We investigate the reactions CO2 causes as it rises. The next step is about grain size, how the gas travels through the sediment-pores. Then we need to understand how all that works macroscopically, on a scale of tens or hundreds of litres. We deduce information from these experiments and from the different scales into mathematical formulas,” said Matthias Haeckel, a geochemist with the research group.

The research has some way to go but scientists believe worthwhile conclusions will surface.

Do you know: what's a bubble-box?