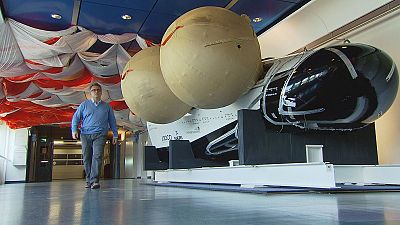 Re-entry is one of the biggest challenges in modern spaceflight. It’s the make of break moment, the time when satellites burn up and astronauts hold on for the ride of their lives.

A new ESA spacecraft, called IXV, will be launched into space in November 2014 in a bid to feed precious new data to engineers as they try to master the difficult transition between space and planet Earth.

Giorgio Tumino, IXV Programme Manager, runs the project:
“The objective of the mission of the IXV is to master all those grey areas that we don’t know about atmospheric re-entry,” he says.

To fill in those gaps in our knowledge the IXV will lift off on a Vega rocket to an altitude of 430 kilometres – as high as the International Space Station – and then fly back to a targeted spot on Earth.

Giorgio talked us through the underside of the IXV: “What you see black is ceramic thermal protection, so very highly performing material. You see some dots where there are the integrated sensors, so we have pressure sensors, strain gauges integrated into the vehicle.”

Getting back to Earth from space is not a walk in the park. During re-entry speed turns to heat. The IXV will reach 28,000 kilometres an hour in space, and as it comes down the friction of Earth’s atmosphere will heat the nose cone and steering flaps to 1,800 degrees Celsius.

That heating reaches its peak at a very specific altitude in our atmosphere – a zone where you either make it, or you don’t, according to re-entry guru José Longo.

“For vehicles that are not designed to have re-entry, like the normal spacecraft, satellites, all them break between 80 to 75 kilometres,” explains Longo, the Head of Aerothermodynamics, at ESA.

To find our more we met up with ESA’s master of space junk, Holger Krag. He monitors debris that’s in orbit and falling to Earth.

To show us the kinds of forces the IXV will face, he talks us through a video of the ATV re-supply ship breaking up as planned during re-entry.

“This corresponds to roughly 100 kilometres altitude, the ATV is already glowing hot. You see quite some tiny fragments falling behind, these are mostly the solar arrays that are sticking out, they fall off first, they are just sheared off by the aerodynamic forces.”

“At roughly 75 kilometres you see this flash, and the cloud of gases leaving behind, that was the explosion, the interaction of the fuel with the atmosphere, self-ignition.”

“Now we are at 60 kilometres, you see very high temperatures, really white glowing objects, they are objects falling behind, that is because they are very lightweight.”

This whole re-entry process happens in a very short amount of time, as Krag, head of ESA’s space debris office, told us:
“From the point where you have done re-entry manoeuvre to the ground, that’s roughly half an hour. From the point where the spacecraft starts to get hot, that happens at around 90, 80 kilometres, to ground it’s just 10 minutes.”

One of the key elements the ESA engineers are testing is the IXV’s innovative shape.

For the moment re-entry capsules for astronauts are flat bottomed, like the Soyuz, and new Orion spacecraft. They’re reliable, but not easy to land in targeted areas.

NASA’s winged Space Shuttle could land on an airstrip. But it was complex, and in 2003 damage to its heat-resistant tiles led to the tragic Colombia disaster.

The IXV is different. It’s what’s known as a lifting body shape, half-way between the two, offering controllability and maneuverability.

That is done by ceramic flaps at the rear of the vehicle. “They will withstand the temperature which are in the order of 2,000 degree Kelvin. They will move to control the vehicle around the flight, so to steer the vehicle, to change the inclination of the angle of attack,” Tumino told Euronews.

The IXV flight will bring fresh, detailed and relevant data about the real conditions of re-entry that we need for space exploration.

“When we look at the future possibility to bring back to Earth astronauts, or samples from asteroids, or in the long-term from Mars, this is a technology that is a must to have on board, to be able to come back to Earth,” says Tumino.

And a real-life test through the Earth’s atmosphere is the only way to really master re-entry, stresses José Longo.

“Neither simulation in computer nor simulation in facilities like a wind tunnel represent the reality. Therefore in the end you need, in any case, to fly.”

As we dream of travelling far beyond our planet, we should always keep in mind that we need a safe way home.

Comet Hunters: 'When the baby goes, don't shake too much'