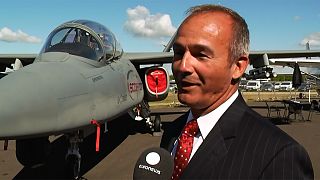 The Textron Scorpion fighter jet made its debut on the international stage at the Farnborough Airshow. It has been described as a “budget” jet and has yet to find a customer. That could change at Farnborough.

Bill Anderson is the President of Textron AirLand. In this interview he explains the thinking behind the jet which took just 23 months from its inception to first flight and his ambitions for the plane.