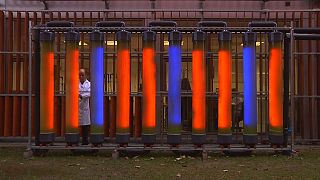 Futuris visited southern Spain, an area famous for its olive orchards, to find out what microalgae and olive oil have in common.

Around 50 litres of drinking water are needed to clean 100 kilos of olives before they can be milled into olive oil.

This causes the water to become full of pollutants and need long, complex and expensive treatment.

But now researchers want to clean up the water the green way, using microalgae as their secret weapon.

Chemical engineer Benito Mogedas explained the importance of microalgae in this process.

“Microalgae eat some of the pollutants in the waste water to take in nutrients during photosynthesis. These are substances such as nitrates, phosphates or phenolic compounds. So microalgae biologically clean that waste water.”

As part of a European Union research project, scientists have set up a pilot plant at an agricultural cooperative in the Córdoba province.

“90 percent of all water used in olive mills goes towards washing the olives,” she said. “Our objective is for every single drop to be recycled and reused for washing – in real time.”

But how do these microalgae clean up polluted water?

Researchers at a very colourful microbiology laboratory in Granada are searching for an answer to this question.

Scientists are using LEDs and advanced microbiological techniques to try to discover the optimum conditions for microalgae – and its appetite for pollutants – to flourish inside the bioreactors.

They already have some leads.

Agustín Lasserrot is one of the microbiologists working on the project. He gave a brief analysis of the data that has already been gathered.

“We already know a number of things. Optimal water temperature is around 27 degrees and the ideal pH of the water is quite neutral,” he said. “We know the optimum concentration of carbon dioxide and know we can’t exceed a certain amount of oxygen. We also know what the best nutrients are to help microalgae grow healthily in the water; nutrients such as nitrogen, phosphorous and potassium. These are the parametres we are trying to optimise further.”

Meanwhile, Mogedas described what the project is hoping to achieve.

“One of the key things we are trying to figure out is the right balance between oxygen and carbon dioxide in the water. Getting to know this in detail will be a big help as we develop an even more efficient recycling system.”

Both researchers and producers wish to increase the competitiveness of the European olive oil industry.

“An efficient recycling system would help us reduce our tap water consumption, so we would save money,” clarified Antonio Cielos Campos, managing director of the cooperative. “We would also create less toxic waste, so our olive oil production would have less of an environmental impact.”

Lopez expanded on this idea.

“Our objective is to provide olive oil producers with usable recycled water at a price that is more or less the same as tap water per cubic metre,” she explained. “Only then can we be sure to have found a realistic solution to the problem.”

Researchers would like to see their recycling system in operation across European olive orchards within five years.

Is olive oil greener with algae?