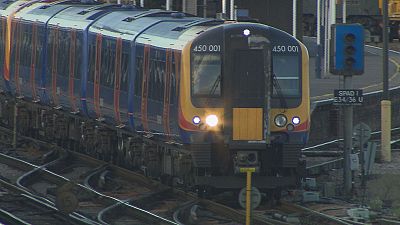 At a unique maintenance depot in the southner English town of Eastleigh, a European research project is underway to help reduce the number of accidents on the continent’s railways. The team is working on new techniques to detect defects in train axles in this potentially life-saving research.

Dimos Liaptsis, an inspection engineer at TWI/AxleInspect, said: “In the last 15 years, here in Europe, there have been 30 deaths and 48 injuries directly linked to structural failures of railway axles.”

The axle takes the strain of the train as Sam Broujeni, engineering manager at Balfour Beatty Rail, explained: “The axles carry a huge amount of load, and they are always under cyclic fatigue. So we need, under certain frequencies, to check the axle.”

The technology is based on ultrasonic testing. Firstly, tests are conducted on artificially damaged axles. Small cracks, show up in red in the system and are easily identified and measured.

The technology is then tested on a working axle in a train. If the axle is diagnosed as without defects; the inspected train is safe to run.

Researchers claim the technique has a millimetric accuracy. inspection engineer Stavros Avramidis is pleased with the accuracy of the new techniques: “Our experimental results show that the smallest defects we can measure right in the middle of the axle can be as tiny as two or three millimetres long and just one millimetre high. So accuracy is currently quite good, it is higher than the average safety standards required by train inspection legislation in Europe.”

It took three years for researchers to come up with these new axle inspection prototypes.

They presented huge challenges as inspection Dimos Liaptsis explains: “One of our main objectives was to develop a system that is going to be as adaptable as possible to different axle diameters and geometries. That’s because the railway industry is using a very large variety of axles. So we had to find a system that is going to be able to account for this variability. And that implies, for instance, the number of critical areas inside a given axle, the different end face diameters of different axles or the distances of those critical areas to the axles end faces”.

Not all trains have the same axle design; they differ between models. High-speed trains, for instance, have hollow axles. So researchers had to develop different sensors to inspect the inner bore as well as the outer diameter.

For that, they had to use a combination of technologies. Iván Castro is an industrial engineer working on the project: “We combined two different techniques: ultrasounds and electro-magnetic technologies. Ultrasounds allow us to inspect the external surface of the axle. We use electromagnetic technologies to explore the internal surfaces. We then process the combined data with unique software. This way we are sure to have covered 100 percent of the axle.”

This new portable axle inspection system has been designed to be faster, cheaper and easier to use than existing ones.

Researchers hope the new system could be on track for coming to the market in around five years.