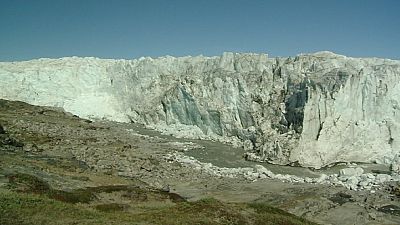 “Definitely, the glaciers in Greenland are retreating,” that’s the view of Bo Vinther, Glaciologist, Centre for Ice and Climate, University of Copenhagen.

“We see that ice strings are increasing their velocity. And thereby they are producing more icebergs out into the ocean,” says Dorthe Dahl-Jensen, Coordinator, WATERundertheICE project.

Global warming is often blamed as the cause of Greenland’s unstoppable melting.

But lately researchers have identified another unexpected suspect.

Summertime is the peak season for glaciologists in West Greenland.

But scientists suspect another mysterious factor also plays a role in this rapid, constant melting.

“We are here right at the ice margins. This is where the Greenland’s ice sheets terminates here, the very edge of the big Greenland ice sheet that stretches some 1000 kilometres to the East out there.

‘What we have observed is that when we have water underneath the ice sheet, then the ice is flowing much, much faster than if you have the ice frozen to the bedrock underneath. So it is really important to investigate this water under the ice, these physical processes going on at the very bed of the ice, so we are better able to model them and predict the ice flow in the future,” he explains.

Scientists at a European Union research project are using the hard gear to understand the impact of those invisible water flows inside Greenland’s ice sheet.

For that, they regularly fly to a scientific camp unlike any other.

The camp was established in 2007 to allow deep drilling in the ice sheet.

Scientists here are aiming to unveil the mysteries lying under 2.5 kilometres of ice. Location of the camp was carefully chosen.

“We needed a site where we knew something about how much snow is falling each year. We don’t want too much snow because then the ice is not old enough. And we don’t want little snow because then the resolution of the layers of each year is too little. So we picked this spot by comparing those two criteria,” explains Lars Berg Larsen, Glaciologist, NEEM Field Operations Office, University of Copenhagen.

The camp’s scientific jewel lies deep in a snow trench.

Researchers drill here to reach the deepest ice, that lies just above the bedrock.

Recovering that deep ice is crucial to understanding what is really happening far beneath.

Steffen Bo Hansen, Drilling Engineer, Centre for Ice and Climate, University of Copenhagen says:
“We have been so far able to produce in the order of around 20 metres of ice per day in average. This quantity matches well our own capability of analysing the ice, because the ice has to be cut and we have various measurements we have to take care of”.

“Something is happening right now. We are actually doing a drill at the same time as we speak to you and something is changing here. It looks good. We are not sure when we are supposed to hit the bedrock down there. So we usually have a few false alarms that can also correspond to the presence of mud, or ice, or dirt, or sand, or other things,” explains Trevor James Popp, Geochemist, Centre for Ice and Climate, University of Copenhagen.

Scientists date deep ice with a technique called “luminescence”; samples have to be extracted in almost complete darkness.

“I m very happy that this has worked out that well. As it seems, we have lots of material that we can work with both for DNA analysis and for time dating with luminescence. It is always good to work with the same sample material and to have both results. And this is the first time it worked.

‘It is good to have material with less grains for time dating, but now we have obtained ‘silted’ ice as well, with a lot smaller grain size. It is very good to have that for comparison,” explains Christine Thiel, Geographer, Nordic Centre for Luminescence Research.

Each sample will also indeed be analysed to extract DNA traces that will help to unveil biological secrets from times when Greenland was ice free and water was flowing on its surface.

“With genetic tools we can get access to the archives of the past environment. It is not sure that we have DNA preserved in the ice samples that we are extracting. But if we had, it would be very valuable for describing how the environment looked like, what kind of organisms lived there,” says Astrid Schmidt, Biologist, Centre for Ice and Climate, University of Copenhagen.

And radar has confirmed the existence of water flows at different parts of the bedrock.

“Water acts like a mirror. So it sends almost the whole radar signal up again. Whereas if you just have the normal dry sediments, then they will absorb something and you won’t have a strong signal back.

‘If for example this area down here at the bedrock is melting, then the different layers of ice will be dragged down by the melt, that is what we see here. And then we see there is a jump in those ice layers. And this probably means that this other area of the bedrock is dry. This radar graphic is a very good indicator of what the bed of the ice is like,“says Nanna B. Karlsson, Geophysicist, Centre for Ice and Climate, University of Copenhagen.

Scientists have established that water under the ice can lubricate the ice sheet and speed up its melting.

But that same water can hold other secrets.

That’s why deep-ice samples are packed and sent to Europe.

At the University of Copenhagen researchers work inside fridges at -26ºC to determine if water flows under Greenland’s ice sheet which can be important to potentially form invisible, forgotten lakes. Dorthe Dahl-Jensen, Coordinator, WATERundertheICE project explains: “I think actually we have found a small lake under the Greenland s ice sheet now. But they are much more rare than under the Antarctica sheet. And that is actually very interesting in itself.

‘And secondly because the Greenland ice sheet is smaller than Antarctica’s. So it is more dynamic, there is more snow falls, the slopes under the ice are steeper. And in that way, the pressure on the bottom is stronger, and it is more difficult to form the lakes at the bed”

And lakes, researchers say, could even sustain particular forms of life, under 2500 metres of ice.

“When we have a lake under the ice, we have a reservoir of melted water that has been formed far, far back in time. For the Greenland ice sheet is several million years back in time. So it is always very fascinating to see if there is an own life form that eventually has been forming down there. If for instance, bacterial life has been developing in a very isolated way from the rest of the climate system. So down there you could find life forms that you don’t find elsewhere.

‘So of course, this fascination is one of the reasons for searching for water under the ice. And when lakes are eventually found, we could perhaps start programs where you drill into the lakes,” says Dorthe Dahl-Jensen

And, researchers conclude, they are far from having drilled out all Greenland´s icy secrets.