One of the conditions facing hundreds of thousands of people working within the European Union, is having to make endless trips to and from their own countries and Western Europe, where they hold jobs which are often very poorly paid and insecure.

Alexandru Spalatelu has just returned to his village in Romania.

He tells us how he was employed by a subcontractor who was linked to a shady Serbian businessman. He worked within a large company building offices at Frankfurt airport.

A series of intermediaries for which this man bore the cost: he received only half the salary he had been promised for the first two months and then absolutely nothing for the following six months.

“They would give us a small amount of money to buy food,” explains Alexandru Spalatelu. “To begin with it was 30, 40 or 50 euros a week for 5 colleagues and myself. Then it was just 10 euros a day for the six of us. We would work 14, 16 or 20 hours a day. Sometimes we would start at 7 in the morning and finish around 1 o’clock the following morning. There were two main issues: we had to finish what we had started and then there was the question of money. We thought that if we worked more and for longer, we would be better paid, but that wasn’t the case.”

Later that day, we met up again with Alexandru Spalatelu, who was getting advise from a Union representative here to help posted workers in the European Union.

Hans von der Brelie, euronews: “How are these employers able to swindle people like Mr. Spalatelu? How does their racket work?”

Letitia Matarea-Türk: “More often than not, the employers don’t pay the legal minimum salary stipulated by the country they are working in, or they ignore the salary scales. Or they just decide to arbitrarily cut a part of the salary.”

Hans von der Brelie :“What should be changed in the European Union to avoid that such cases could happen again?”

Letitia Matarea-Türk: “There should be limits on the allocation of projects, no matter what branch of operations it concerns. The number of sub-contractors getting involved should be limited and controlled. We can see that this business of sub-contracting is growing everywhere and it leaves the door wide open for the exploitation of foreign workers.”

In spite of his bad experience, Alexandru Spalatelu, who has spent more than 20 years working abroad – in Jordan, Greece, and Germany – is getting ready to leave for Italy.

We asked him what message he would like to give to the European Commission.

“Ban these ghost companies, in Germany and everywhere,” says Alexandru Spalatelu. They bring people in from abroad and exploit them like slaves, whether they’re Bulgarian, Romanian or whatever nationality. And the authorities in the countries where these companies operate should control what they are doing and ask them “ have you received the money the main company owes you? And have you paid your employees?” If the answer is yes, you can carry on with your business. If it is no, you should stop operating.”

In Italy, Alexandru will transport building materials between Rome and Milan. He has no written contract. He is,once again, leaving on a promise.

“Ten of us were made to live in one room”

Another journey: that of a young 22 year old Romanian, who has come back to his country and to his partner and baby.

He tried his luck in Germany in a large company dealing with parcel deliveries, through the intermediary, yet again, of a sub-contractor.

His working day would begin at half past four in the morning and finish at 9 in the evening. And there were other things that didn’t come up to scratch.

“According to the vans’ number plates, they were Romanian,” explains Alexandru Crisan. “I don’t know if they were insured or not, but what I do know is that I wasn’t insured and I was really surprised when I saw what a bad state the vans were in. The hand brake didn’t work, and neither did the gears. And with all that I wasn’t insured….”

Alexandru recalls another painful experience when he went to Germany through an intermediary who had put him in contact with an Italian sub-contractor, to demolish old military barracks.

“Ten of us were made to live in one room. Two of us had to share a single bed. Seven were sleeping in the double bed. It was so cramped that we all had to be in unison if one of us wanted to get up or change position in the bed during the night. We all had to move at the same time.”

Erich Mocanu has just got back from Germany. This former private detective considers himself to be the guardian angel of Romanians in difficulty abroad, particularly in Germany.

On that day he had come to meet young Alexandru and Ciprian. Both had come up against harsh realities – team leaders who hit their colleagues, workers who weren’t getting paid or who had to pay for their work clothes.

Ciprian noted down what he had witnessed when he was employed in a Bavarian abattoir.

Hans von der Brelie, euronews : “It’s madness: Ciprian had to work 19 hours nonstop in this abattoir, picking up the guts of dead animals, it sounds like slavery, I do not understand how this can be allowed to happen in 2017. Erich, how do you explain it?”

Erich Mocanu: “It’s possible because Romanian workers are recruited under conditions which nobody seems to fully understand. The biggest problem lies in the subcontractors because no one can figure out who in the staff works where and when.”

Hans von der Brelie: “Erich, how does this fraudulent system of subcontracting work?”

Erich Mocanu: “Shady employers can avoid paying taxes in Germany by registering their workers on a list of employees in a fictitious company. They will, for example, register them in Romania and give them the Romanian minimum wage rather than the one in force in Germany.

“This is a contract set up by a subcontractor who works for a German parcel delivery company. This contract complies with Romanian regulations: 8 working hours per day, 1450 Leus per month, which is about 300 euros. Its leader is the head of two companies: one is based in Germany and the other in Romania. In Germany, he signs contracts with the main companies. In Romania, he recruits staff. So no tax is paid in Germany and there are no social contributions nor pension contributions. “

“Everyone is getting money in this story”

During Ciprian’s time at a Bavarian abattoir, his hands became infected with the juices from the carcasses, despite him wearing gloves. He had no contract, no papers, no insurance, just a fraudulent access card.

“I had an access card, so I went into the factory with it, but it was not in my name,” explains Ciprian Dehelean. “It was in someone else’s, someone who had stopped working there for some time. When I left that factory, the people who came after me were given that same card.

“It is the fault of the German employer because he works with these dubious intermediaries who bring him labour unofficially.
Everyone is getting money in this story. The employer gets his share, the intermediaries get theirs … They manipulate us, the workers, so they can receive a commission at our expense … It’s not fair! “

Despite this, in the absence of any prospects in his country, Ciprian is determined to go back to construction sites in France or apple orchards in Italy. 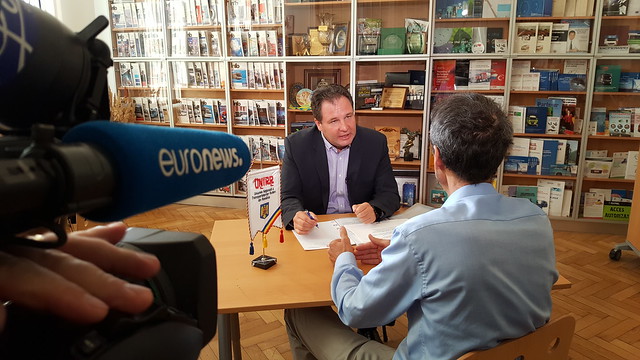