England’s wine industry is booming, thanks to climate change.

Mark Driver, who owns Rathfinny Wine Estate, used to manage a multi-billion-pound hedge fund. He left the City of London in 2009 to invest his money in wine.

He has spent ten million pounds so far building up a complete new wine estate in the southeast of England.

“Two-thousand years ago the Romans were here, just two kilometres from here they had a large roman villa which would have had vines,” Driver told Euronews. “Then, in the middle-ages the cold period came and we became beer-drinkers. Vines started to be planted again in England in the 1950s, ’60s and ’70s. Really with the benefit of climate change we are now seeing a lot more vineyards being planted in England.”

Driver’s chances are of success are high: Rathfinny lies on the same band of chalk as France’s Champagne region.

And as Andrew Jefford pointed out in this Decanter article: “There are extensive untapped acreages waiting for planting; propitious UK farmland changes hands at much lower prices than do classified Champagne vineyards.”

“Thirty years from now I think England will be one of the world’s leading wine makers selling 50m bottles worldwide,” Hambledon’s managing director Ian Kellett told FT in this piece, “but it needs billions, not tens of millions, of pounds of investment,” he added.

Mark Driver bought his machines in France. After quitting his previous job to follow his vineyard dream, he spent two years studying wine-making.

“We have got weather records which go back over 100 years: and when you look at the weather records you can see that over the last 25 or 30 years we’ve seen a gradual increase of average annual temperatures,” Driver explained to Euronews. “You have a much greater ability to ripen your grapes to the right levels, to get the right level of sugar, the right acidity, the right balance of grapes to make really spectacular sparkling wine.”

The Insiders team travelled northeastwards, to the village of Earsham where we met Hannah and Ben Witchell, who spent two years in France’s Beaujoulais region learning about wine making.

Before that, they traversed the world of vineyards, picking grapes in California and Greece, and around the world from Argentina and Chile, to South Africa, New Zealand, and Australia… 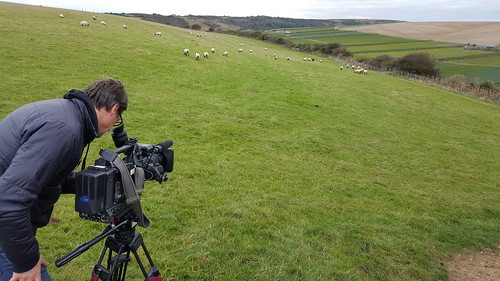 Euronews asked Ben how to choose the best location for a vineyard.

“You have to have quite a low altitude site, ideally close to the coast, to improve the frost risk,” Witchell told Euronews. “Although the ripeness and the sugar levels are not quite as high as in some of the hotter climates we can have a lot more of the flavour profile in the grape developing, so the phenolics and the acidity and all the different aroma compounds can develop and make a product that is really aromatic and quite tasty.”

Ben and Hannah gave up their careers in IT and the travel industry.

They used their savings and a grant from the European Union to buy more than 12,000 vines in Germany. Planting them and bringing in new machinery added up to 300,000 pounds.

What was served at Buckingham Palace…? https://t.co/ysBmO6KIGo#wine#englishwineRoyalFamily</a></p>&mdash; Decanter (Decanter) November 4, 2016

Alistair Nesbitt, a climate expert from the University of East Anglia, researches how climate change impacts wine growing in Britain.

“What we have seen over the last 10 to 15 years is an increase in vineyards, in particular in the south-east of England,” Nesbitt told Euronews, “…and what is likely to happen in the next ten years or so is a spread of viticulture into different areas into traditional arable areas such as parts of East Anglia up here.”

Alistair travels around the country supporting pioneers such as Ben with his scientific input. The researcher collects data on temperature, wind and moisture…

He explains that the information helps both the winegrower and global climate science.

“Climate change [is] for real,” Nesbitt told Euronews, “We are seeing the difference in vineyards now, we can see from the data going back over 60 years: temperature increasing… generally a range which during the vine growing season has been going up over one degree. That might not sound like much but it is very significant when we are talking about the ability to grow vines… or not grow vines.”