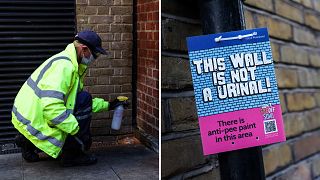 In central London's Soho district, the Westminster City Council are taking a stand against "public pee-ers" with their latest weapon: anti-pee paint.

According to council officials, the special paint creates a water-repellent layer, so that urine and other liquids splash back, delivering those who choose to urinate there with a rather nasty surprise.

The council plans to treat the walls of several buildings in the Soho area with the anti-pee paint, including popular nightlife spots and areas known for high levels of public urination.

"It was something being raised regularly, especially over the weekend, say from Thursday to Sunday where we'd have a lot of visitors here into Westminster, specifically Soho, and they were coming up alleyways like this and other streets as well and they were urinating," explains Mary O'Connor, a neighbourhood coordinator with Westminster City Council.

"As a result, it was causing issues with the residents here, the community, and the businesses where they'd come out on a Monday morning and there would be an odour of urine," she adds.

But London is not the only European city taking creative and unique approaches to public "pee-ventions".

From the streets of Paris to the alleys of Amsterdam, let's take a look at some of the other ways European cities are cracking down on the age-old problem of public urination...

This Parisian initiative gives new meaning to the term "watering the plants".

One of the French capital's solution to the problem of public urination was to introduce "uritrottoirs", which are basically public urinals housed in flower boxes.

They are not only functional, but also environmentally friendly, as the urine is used to fertilise the plants growing in the uritrottoir.

According to French officials, one year of a person’s urine holds enough nitrogen, phosphorous and potassium to fertilise 400 square meters of wheat. Impressive stuff!

So the next time you're in Paris and nature calls, don't be shy – head to one of the city's uritrottoirs and do your part in keeping the city green and clean.

In a similar fashion to Paris, the city of Amsterdam has found a creative and sustainable way to 'weed' out the problem of public urination.

Users relieve themselves by using the openings on the sides of the planters, which have an internal tank filled with hemp fibres from the cannabis plant.

Once emptied, the mix of urine and hemp can be used for organic fertiliser for the city's parks, roof gardens and urban farms.

Taking the walk of shame

In 2012, the Chester Council in the UK introduced a rather unusual initiative to crackdown on the number of people urinating on the street, one that will not only cost you money but also your dignity.

If caught urinating in the open, Chester residents have two choices. First, go to court and pay a large fine, or agree to participate in a “heritage awareness course” by paying £75 (approx. €84).

Offenders who choose the second option are informed about the impact of their actions on residents and tourists. They are then shown CCTV footage of themselves urinating in public before being required to take a public walk of embarrassment through the city centre.

‘We want to make offenders accountable for the damage to the city’s heritage," Chief Inspector Julie Westgate of Cheshire Police said in a statement.

Czech out this public pee-er

In one particular spot in the Czech Republic, urinating publicly could make you an internet sensation.

The three-stage pictographic warning, which was reportedly put up by an upset hotel owner, sends a clear message to anyone considering urinating in non-designated areas. It cautions that any such actions will be recorded by CCTV cameras and posted to YouTube.

The sign is located in Mikulov, a wine-making tourist town sitting on the southern border of the Czech Republic and Austria.

So if you plan on letting loose in the Mikulov region of the Czech Republic, be sure to look out for this sign.

'Love Island' is back with a boost for pre-loved fashion