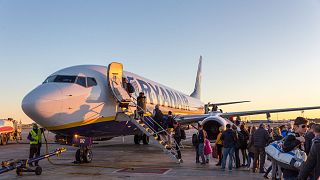 Ryanair has issued a warning to passengers planning to travel this November.   -   Copyright  Cleared
By Euronews  •  Updated: 07/11/2022

Taking a Ryanair flight tomorrow? Plan ahead - or you could end up out of pocket.

The budget airline has issued a warning to passengers planning to travel in the next few days.

The airline’s website and app will temporarily be down for maintenance for 11 hours between 6pm on 8 November and 5am on 9 November.

It means that passengers won’t be able to check in online during this time.

“Customers who are due to fly during this 11-hour period should check in online before 18.00 on Tuesday 8 Nov,” Ryanair wrote in an update on its website.

Those who don’t could face paying a fee of €55 (€30 for flights to Spain) to check-in in person at the airport.

How far in advance can I check in for my flight?

Normally, the airline encourages customers to check in online. Boarding passes are sent directly to your phone or can be printed off.

Ryanair passengers with a Flexi Plus ticket or those who have purchased a seat can check in up to 60 days before they travel. If you haven’t bought a seat and you booked your ticket after 28 January 2021 then you’ll be able to check in 24 hours in advance of your flight.

The airline is one of just a few that charge passengers to check in at the airport so people travelling on these dates are being warned to do so early to avoid paying the €55 fee.

A number of passengers were caught out last month when Ryanair also conducted scheduled maintenance on its website and app.

Does Ryanair charge to print your boarding pass?

It's worth making sure you have printed your boarding pass or downloaded it to your phone. If you arrive at the airport without a boarding pass, Ryanair charges a €20 'Boarding Card Reissue Fee' to print it for you.

The in-person check-in fee was first introduced back in 2007 but was increased earlier this year to €55.

In August, Ryanair boss Michael O’Leary told the BBC that the era of cheap flights was over. The rising cost of fuel has pushed prices up meaning previous promotional fares that offered trips for as little as €0.99 won't return for a “number of years”.