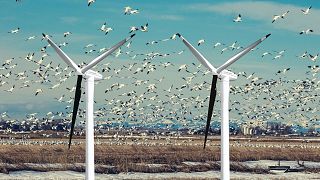 A single blade of each turbine being painted black could prevent bird strikes.   -   Copyright  Unsplash
By Rosie Frost  •  Updated: 27/08/2020

Thousands of birds killed by wind farms could be saved with a simple solution, painting just one of the turbine blades black. Scientists from the Norwegian Institute for Nature Research found that it reduced the number of birds killed by around 70 per cent.

Birds, bats and other flying creatures often die when they fly into the large white poles and blades. Despite having incredible eyesight, birds are not very good at seeing things head-on. This means that the white blades can blur in the birds’ vision as they approach them making them practically invisible. The scientists involved in the study believe that painting a blade black reduces this “motion smear” and gives them time to avoid a collision.

Bird deaths are considered one of the main impacts of wind farms and has led politicians, like US President Donald Trump, to claim that wind farms are “bird graveyards” as an argument against the use of more renewable energy.

However, deaths by wind turbine are often overstated and they are far less likely to kill birds than other threats like cars or even domestic house cats. But this doesn’t mean we shouldn’t be doing everything possible to reduce the impact that wind farms can have on bird populations.

As wind energy becomes more common, the number of birds killed is only likely to increase which makes finding an effective, cheap solution important.

Smøla wind farm in Norway has been trialling the solution since 2013. It is one of the largest onshore wind farms in the country with 68 turbines and a number of deaths of white-tailed eagles have created opposition.

Four turbines had a single blade painted black and were then compared with four more control turbines which were left white.

“Before the experiment, six white‐tailed eagles were found dead at to‐be‐painted turbines but after painting none,” researchers said in the report. When compared to the control turbines, there was a 70 per cent drop in the number of birds that have been found dead. Certain kinds of birds benefited more, including large birds of prey like the white-tailed eagle.

Visual queues, like a single black blade, seemed to increase visibility and may allow birds time to avoid an impact. The team hopes that the findings from this single site can be used to trial the paint job elsewhere and work out whether it could be a viable solution to the problem of birds striking wind turbines.