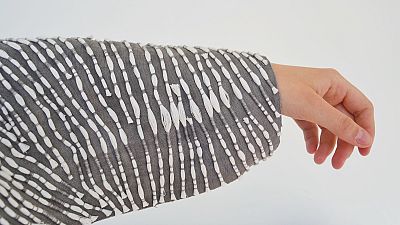 Sustainability is an increasing focus for the fashion industry, but have you ever thought about the last outfit you will ever wear?

There are strict rules around what can be worn for a cremation, as items like rubber-soled shoes or treated leather jackets aren’t allowed to be burned. For burials, however, it’s a different story entirely.

People who are having a specifically eco or woodland burial, do have to follow some strict stipulations and must be buried wearing entirely biodegradable clothing. But for anyone being buried in a standard plot, what you wear is entirely fair game. If you fancy being laid to rest in entirely synthetic, non-biodegradable fabrics, nobody is going to stop you.

We may think that our effect on the planet ends when we die, but that couldn’t be further from the truth. “An individual’s impact on the environment continues after death, quite literally, in fact,” writes Young-A Lee and Gwendolyn Michel from Iowa State University, in a paper considering burial clothing’s ecological footprint.

This is where Northern Irish designer Francesca Rea comes in. The 22-year-old, a recent graduate from Dundee’s Duncan of Jordanstone College of Art and Design in Scotland, has created a series of eco-friendly burial garments.

After speaking with someone who had recently attended a funeral where a wicker basket was used instead of a coffin for environmental reasons, Rea started to consider the ecological impact of funerals.

“Even with the existing sustainable options for burials, the materials that the body is clothed in are not often considered,” explains Rea.

Around 65 per cent of all fibres used in clothing are made from synthetic materials, which means the fabric can take centuries to break down, releasing harmful chemicals in the process.

That’s why Rea wanted to create garments which were actively beneficial for the environment. “The natural fibres of the designs will decompose and add to the ground where the deceased is buried,” Rea says, “and plants can grow from this which continues the cycle of life.”

“The natural fibres of the designs will decompose and add to the ground where the deceased is buried.”

Though she has long had an interest in sustainable fabrics and fashion, funeral-wear wasn’t something Rea ever anticipated creating.

“I always knew my final year project would be something to do with the environmental costs of the clothing industry,” she explains, “so this concept of death was a way to put my idea into context. Death and burials are not things I think about often!”

There’s also an emotional side to Rea’s work. Her designs, although only conceptual at the moment, could potentially be put to use and be the last outfit a person wears.

A post shared by Francesca Rea embroidery art (@francescathreads) on Jun 3, 2020 at 7:27am PDT

“It feels important and special to design clothing that could potentially be worn by a stranger in their grave,” Rea says. “I think my project is comforting for those of us who don't believe in an afterlife and to whom the environment is important. I know that death is seen as a scary thing in our culture that we try to put off as long as possible.”

If you don't believe in an after-life, says Rea, your body rotting away in the ground can seem gruesome and sad. But actually, “it's the most natural thing, and it kind of proves that death isn't the end-of-the-line, we're all part of a circle.”