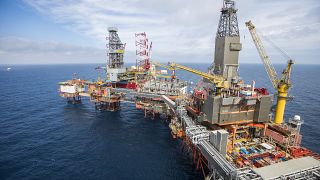 A giant energy producer, Norway finds itself at the forefront of an energy crisis that reached dramatic new heights on Tuesday after the alleged sabotage of Russia's Nord Stream gas pipelines in the Baltic Sea.

"I think obviously this is sort of a challenging moment. We are doing what we can to maintain the security of the Norwegian Continental Shelf," Andreas Bjelland Eriksen, State Secretary in Norway’s Ministry of Petroleum and Energy, told Euronews Next.

NATO ally and European Free Trade Association (EFTA) member Norway has proved a lifeline to the European Union by becoming the 27-nation bloc’s biggest natural gas supplier since Russian cuts to gas supplies after its invasion of Ukraine.

Norway has ramped up gas production to meet European demand and, according to Eriksen, the country is expecting to produce 8 per cent more gas this year compared to last year.

Before the war in Ukraine, Norway covered about 20 per cent of the EU’s gas demand and will this year supply about 25 per cent of it, according to the research company Rystad Energy.

"I think if we accept the premise that Russia's invasion of Ukraine has changed the energy landscape in Europe forever, and that there is sort of no going back to the pre-war status," said Eriksen.

"They [Europe] will need gas from other sources than Russia. And in that perspective, I think it's it's hard to see that there are many places where it's more natural to continue to import gas from in a European context than from Norway".

According to Norwegian government statistics, revenues from the petroleum industry are expected to rise by about a quarter to €90 billion this year, up from €62 billion in 2021.

“We produce as much as possible and we do everything in our power to maintain the system at full speed going forward so that we deliver as much energy as possible to Europe,” said Eriksen.

"For us, it's important that they know and we show them that Norway is a reliable, trustworthy, and long-term energy partner for Europe".

But with Europe suffering high inflation and skyrocketing energy prices, a debate has ensued as to whether Norway should sell its natural gas below market price to prevent a European recession, something which would be damaging to Norway’s biggest trading partner.

Eriksen said cutting prices was an option that is not yet completely off the table.

"First and foremost, it's important to us to say that we haven't closed the door on measures that can help stabilise the energy price and also maintain the European energy security," he said.

But he added there are concerns if Norway were to do this.

We are for several reasons, sceptical about a price cap as a sort of measure in the short term to help alleviate the effects of the crisis

The first reason is it could lead gas purchases away from the European market, which "would sort of strengthen the underlying problem and the reason why prices are high, namely the fact that there is too little energy in the system due to reduced imports from Russia," he said.

The second issue with lowering gas prices is it could lead to higher energy consumption than what is used now, which "would contribute to sort of strengthening the crisis that we see now," Eriksen added.

"We are for several reasons, sceptical about a price cap as a sort of measure in the short term to help alleviate the effects of the crisis".

On September 9, Norway’s prime minister Jonas Gahr Støre warned against a price cap on Norweigan gas sold to the EU as he said it would not solve the bloc’s energy problems, according to the Norwegian newspaper Verdens Gang (VG).

But Eriksen is adamant that Norway and the European Commission have a strong relationship.

"I think we have a close dialogue with the Commission, but I think we can be honest that there are no easy, quick fix measures on the table," he said.

"The sort of obvious challenge due to the lack of energy in the system isn't solved by short-term measures.

"And we want to be a constructive dialogue partner for the EU going forward. But it is difficult to sort of find the measures that can help in this current crisis".