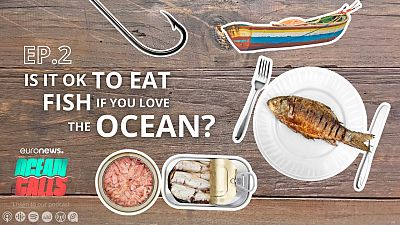 Certified organic, dolphin-safe, line caught, or MSC certified? The labels on fish products being sold in Europe can be confusing, so how do you decide which is the most sustainable choice?

“It is very difficult for a consumer to know where a product is coming from”, says Vanya Vulperhorst, the European campaign director for Illegal Fishing and Transparency at conservation organisation Oceana, in the second episode of our**Ocean Calls**podcast series.

Each product on the European market, including seafood, has to fulfil specific requirements before it reaches consumers. And in some cases, the retailer is obliged to indicate on the packaging the species name, catch area and the way the fish was caught, Vulperhorst says.

“But unfortunately, this is not required, for example, for tuna cans”, she adds.

“So in the end, you have no idea what kind of fish you're eating, if you're eating an overfished or a well-managed species,” she tells Ocean Calls podcast host, Jeremy Wilks.

On average 80 per cent of the fish that arrives at the world's markets is from sustainable stocks, but 20 per cent is not, explains Manuel Barange, the director of the United Nations’s Fisheries and Aquaculture Division at the Food and Agriculture Organization (FAO), the second guest in this episode.

“That's an average around the world. So if you apply this to your circumstances, there is a 20 per cent chance that when you get to the markets, some of the fish you'll see would be from overfished stocks”, he says.

“And that is a problem.”

Listen to the Ocean Calls podcast episode in the player below

Why is traceability so important?

According to the Centre for the Promotion of Imports from developing countries (CBI), Europe is the world’s number two seafood importer, with a total value of seafood imports reaching $54.8 billion in 2020.

The EU imports fish for consumption but also for further processing and exporting.

“For example, hake in the high seas (...) is processed on board, and it arrives frozen, already ready to distribute to the market. And that has a very clear sort of labelling.”

The products that arrive fresh onto land, if they’re not sold fresh by your local fishmonger, are going through a new production process which may happen in one or several countries to then be traded all over the world," Barange explains.

There are many different types of fisheries, he says, and therefore the traceability and the documentation and the labelling of those fish can differ.

Oceana is calling for clearer traceability rules from the authorities. “It cannot be the responsibility of the consumer to know if a product is sustainable”, Vulperhorst emphasises.

Some consumers, however, still have many questions about the origin of the fish on their dinner plates.

Subscribe to the Ocean Calls podcast on your favourite podcast app

Ocean Calls is created in partnership with the European Commission's Directorate General for Maritime Affairs and Fisheries, also known as DG Mare.

Is it too late to save the ocean?