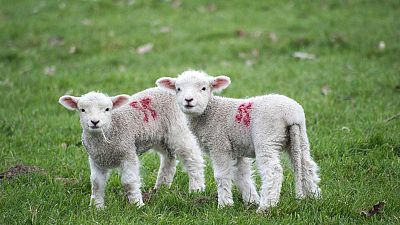 The European approach to animal welfare has recently been the subject of a renewed debate. The pandemic has stressed the importance of a strong and sustainable food system and highlighted the links between our health, ecosystems, supply chains, and consumption patterns. Notably the one with farmed animals.

COVID-19 and climate change have alerted us of the need for a systematic change in the treatment of animals, says Inês Ajuda, farmed animals programme leader at Eurogroup for Animals.

Polls across the block confirm our interest in the well-being of farmed animals.

“The welfare of farmed animals is a shared concern for Europeans and it is part of our shared identity to ensure that farmed animals have a life worth living,” says Olga Kikou, head of the charity Compassion in World Farming.

But animal welfare rules have not just come to the forefront during the pandemic and have been a hot topic for decades.

In the European Union, discussions started in the 80s, which led to the adoption of a series of directives to protect farm animals. But they are often criticised for being too vague.

The directives and recommendations advise on matters such as space, balanced diets, environment, and limitation of harmful procedures. But animal welfare laws vary across Europe with northern states generally more strict.

Globally, the animal welfare acquis should ensure they have good physical health, mental wellbeing, and the ability to carry out natural behaviour. But the current rules can be problematic.

“As current things stand, it is easy to have a vague interpretation of what the general farming directive means, and this can lead to serious problems for animal welfare,” says Ajuda.

Some companies do not comply with the directions, but what’s more important is that even when they do adhere, many irregularities occur because laws are so outdated.

For example, “there is no legislation requiring particular space or housing conditions for fish, or for transporters to provide for their welfare.”

Ajuda says science has considerably advanced since the rules were first established, so the “Animal Welfare acquis needs a serious and extensive review.”

The opportunity for change appears to be in the works

The European Green Deal has come to set core policy initiatives to make Europe climate neutral in 2050. A healthier and more sustainable EU food system is a cornerstone of this deal, and a special programme has been designed to achieve it, Farm to Fork.

The initiative has set an ambitious target for the European agriculture industry, which animal farming is considered an integral part of.

Good animal welfare standards have been shown to help reduce the dependence on excessive veterinary medication, which is also one of the key goals of the Farm to Fork strategy.

The extensive use of antibiotics is a concern because of the potential development of antibiotic resistance, which could compromise animal and human health.

When an animal is suffering from stress because it is, for example in a cage, like a mother pig that can't properly interact with her piglets because she can’t turn around or reach them, “it usually leads to an impact on the immune system, which then leads to susceptibility, making them more prone to disease, and this means more antibiotic use,” says Ajuda, who is also a veterinarian.

The Farm to Fork strategy is calling for a review of the EU’s animal welfare legislation, which brings many promises to change current standards and ensure that the welfare of farmed animals is substantially improved.

“Phasing out cages is indeed one of the most pressing issues that require the EU’s attention. Another key issue the EU needs to tackle is the transport of live animals and their exports to third countries,” says Olga Kikou.

It is very difficult for Europeans to find information on animal welfare levels of the animal products they buy. Some labels with animal welfare claims exist, but “some are more powerful and transparent than others,” says Ajuda.

“We do have the mandatory marking for fresh eggs which is definitely a step in the right direction, but more needs to be done,” she adds.

The EU consumer is lacking a model that would allow them to identify labels and make a conscious choice, such as when they choose to buy organic.

The label needs to be made mandatory, says Ajuda, and it needs to be across all animal products. She says it should also be imposed on imported products.

The latter is important because it ensures the EU’s animal welfare standards are not undermined by “loopholes that make no sense whatsoever,” says Kikou. But also because higher standards should not fail to protect EU farmers from unfair competition, such as cheaper imports of meat produced under lower standards from abroad.

Labelling may also work as an incentive for farmers, fishermen and producers who are crucial in the implementation of the Green Deal, and in the mission to improve animal welfare.

How sustainable farms in Italy are improving animal welfare