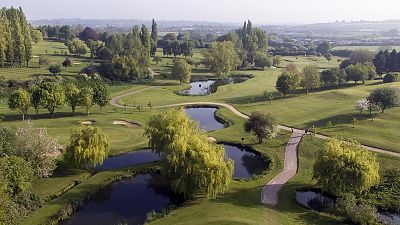 Ryan Curtis is a writer and founder of The Club. Here, he responds to a previous op-ed on Euronews Living, which called for the end of golf, and offers his insight into the game.

My name is Ryan and I’m a golfer.

Believe it or not I’ve never had a trust fund, I was raised by a single mum in Cornwall, UK. We didn’t have a lot of money but had a small supportive family which included my mum’s brother and his wife who are environmental activists with Extinction Rebellion and live self sufficiently in a small Cornish cove.

I took up the game as a kid, at the beautiful Newquay Golf Club. I started off on a seaside links course, which was around £40 (€45) for a child to play unlimited for the whole year. The club was, and still is, full of people from the whole community and you’re much more likely to see the local taxi driver, plumber or barman playing, rather than a hedge fund manager.

Why am I telling you this? After reading Abbie Richard’s piece, Golf is a giant board game damaging the planet: Time for it to go, I felt the need to respond.

I am not the stereotypical image of a golfer - and I’m keen to dispel the clichés which lead to such a misguided perspective of the sport.

It all started in Scotland

So if we’re really going to look at golf objectively, let’s go back to the beginning. The game was in fact popularised in St Andrews in Scotland in the 19th century, by a working class father and son marvellously named Old Tom Morris and… Young Tom Morris.

St Andrews, ‘The home of golf’, is another example of links golf. It comes via the Scots language from the Old English word hlinc: ‘rising ground, ridge’. Similarly to hundreds of courses in the UK, the course was created because the land wasn’t built for crops. Put simply, the dunes, undulating surfaces and sandy soil weren’t suitable for arable farming.

These courses tend not to be overly manicured, preferring to blend in with the natural terrain and in some cases they don’t even employ green-keepers, instead leaving it to grazing animals to keep the grass cropped.

Here, the local community can all play unlimited golf on the world famous ‘old course’, for just £240 (€270) per year, kids go free and non-golfers can roam as they please. On Sundays golf is not allowed, meaning you’re more likely to see dog walkers or drunk students throwing a frisbee on the picturesque seaside grass.

At nearby golf course Carnoustie, they also take their environmental and community responsibilities seriously, as shown by this guide for golfers and walkers with information on the vast amount of wildlife in the area. It even includes activities for kids to spot all manner or animals and plants.

“More than 70 per cent of most golf courses are not maintained - rough land areas, sand scrapes, trees and gorse are perfect examples of attractive habitats for various species of wildlife,” he says.

Wells adds these conversations are often presented in an “overly negative light”.

“There is a huge amount of work to be done to understand the environmental and wellbeing benefits of golf and golf courses. Instead of insulting from the side lines, golf needs to be better understood by those who want to help the planet, to assist our collective objective to leave positive legacies concerning our planet for future generations.”

Carnoustie Golf Links became Environmental Golf Course of the Year in 2018, and the club claims to be “incredibly focused” on biodiversity, air quality and climate.

Sustainability is also at the core of the sport, and this can benefit the local community. At courses like Carnoustie, they provide green spaces which include acres of natural land and seascapes for people to enjoy. But courses are also turning to sustainable and natural products such as organic fertilisers, to encourage plant health and nutrient take-up without man-made chemicals.

“Turf also improves the air we breathe,” says Wells. “The turf growth process takes carbon dioxide from the air and releases the oxygen we need. A landscape of turf, trees, and gorse of around 2,000 m2 in size generates enough oxygen for one person for one year.”

Swinton Park GC in Manchester is another UK-based example of an oasis for local residents. It sits amidst a jungle of housing where the local working class community, both golfers and non-golfers, have had to fight to keep the club from property vultures.

Having visited myself, I would say it is clear that this course is a vital community social hub.

'Where golf does have a problem is with its image'

Now, just because we’ve proved golf courses can be environmentally friendly, that doesn’t mean they all are.

The excellent Anthony Baxter 2011 film ‘You’ve Been Trumped’ and it’s 2014 follow up ‘A Dangerous Game’ show the dangers of rich developers, including the outgoing US President, playing on golf courses. They ride roughshod over planning and environmental regulations as well as local residents to create uber-exclusive courses in cities like Aberdeen and Dubrovnik.

As Abbie Richards puts it in her opinion piece on the topic, golf needs to do a better job of showing the side of itself that isn't old white men who don’t care about the planet.

But these people don’t define golf. Golf is simply a game.

Yes, it’s a board game played by millions of very normal folk around the world. It does not discriminate on age, gender or ability, meaning anybody can compete (or play for fun) and follow in the footsteps of the best golfers on the planet.

It’s not easy to play football at Wembley Stadium or tennis at Wimbledon but anyone can play The Open course at St Andrews the day after Tiger Woods.

No one’s talking about the health benefits

Walking six miles at a time is great exercise in and of itself, but perhaps less known are the psychological benefits of golf.

18 months ago, I tweeted from **our golf media brand account **simply saying how I felt golf was good for my mental health and was staggered by the response.

Hundreds of people responded saying golf helped with their anxiety or depression - a few even said that golf had saved their lives!

The sport provides exercise, requires focus, is sociable and is played in a whole manner of natural settings. The bottom line is that all these things are fantastic for our mental health and it’s a combination not found in many pursuits.

I’ve now started a project called ‘The Club Talks’ and partnered with mental health charity CALM so that golfers across the UK can raise money for suicide prevention helplines and to train more mental health First Aiders.

This is all possible because of regular folk who love the game, where they play and are passionate about looking after the natural habitats they frequent.

So my final word to golf-basher Abbie Richards is that I fail to see how that is “socially or environmentally destructive”. If you ask me, it is quite the opposite.

Water is key to our economic future so why aren’t we investing in it?